Israel Threatened to Wipe New Zealand Off the Map 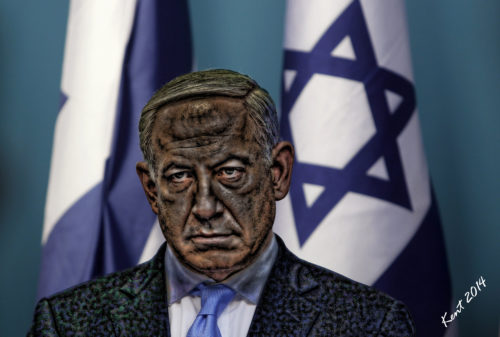 Leader of the ‘Jewish’ State, Benjamin Netanyahu threatens “repercussions” against New Zealand for United Nations vote. Look at the eyes of this man – do you see “peace”? Sometimes refer to themselves as the “Edomites” – but a better description might be the ”$odomites’, given what they appear to have done to the Middle East.

Yahoo is apparently a Hebrew word meaning “Satan”. Net and Yahoo – Satan’s Net. It seems to be a common theme with this ‘club’ – hidden meanings in the name. Perhaps part of the “Key” to their modus operandi – the MO – or Means of Operating. Along with Monarchy, Money, Monopoly and Monotheism. The 4 so called MO’s of the occult fascists that run this World, and have done so for a very long time.

One Queen, one central bank, control over all industry, and one God. A god of wrath, war, judgement, child abuse and blood sacrifice by any serious analysis. A god clearly suffering from an inferiority complex, possibly caused by circumcision.

The headline is an attention grabber – admittedly – borrowed from the phrase the ‘western’ media  invented and attributed to the old leader of Iran, who actually said Israel didn’t have a right to exist in Palestine. The false interpretation ‘We will wipe Israel off the map’ was however pumped out and repeated across the Zionist owned mainstream media world wide for years, just one more lie to add to the ocean of lies these people use to maintain their monopoly over power.

Iit is said that 96% of American mainstream media is in the hands of just 6 corporations. Its a similar problem in New Zealand.

And terrorism appears to be the main tool of the Israeli State when the lies fail or are exposed – so we presume it will be more terrorism the so called Jewish State will direct at New Zealand. War By Deception is the slogan for the Israeli Mossad who will possibly now be deployed against New Zealand and Kiwis – careful to set it up so others will be blamed.

This is what evidence suggests happened  with 911 – Israeli and Mossad footprints all over it, but skillfully blamed on ‘radical Islam’ – and that lie repeated over and over across all Western media to this day.

This also appears to be the case with so called  ‘ISIS’ – which evidence suggests is in fact the Israel Secret Intelligence Service .Skillfully blaming 500 men dressed in monkey suits, armed with brand new US and Israeli made guns and iphones, for taking over large chunks of Middle Eastern oil supplies. Stage a very bad beheading in the desert then pump the images into lounges across the West at 6pm- job done.

The latest Zionist puppet Donald Trump – real name ‘Drumpf’ – spoiled little  brat – yet to answer for child abuse allegations – like so many of these puppet ‘leaders’ these days. Most likely installed to set the stage for war with Iran –  and made possible via Wikileaks, so called ‘Russian hackers’ (probably Israeli hackers) and even a little help from the FBI if not his cousin Hillary herself.

We presume it is just theater this latest ‘revolt’ at the Rockefeller and Rothschild (Red Shield/ Hexagram) controlled and funded United Nations. We hope not, but it is hard to see Murray McCully as a hero after the whole Saudi sheep farm bribery saga, where the New Zealand National Party seemed to be following ‘the foreign bankers’ instruction by awarding $20 million of tax payers’ money to a Saudi businessmen in secret  (illegally). If McCully or anyone else at the UN wanted to to be heroes – all they would have to do is expose the evidence of Israeli involvement in 911.

For those still catching up, its a fake Royal family the Zionists have placed in Saudi Arabia, having invaded and taken over a Nation of tents, camels and undiscovered oil earlier in the 20th century, using the British military that time.  If anyone had any doubt that is the case, just look at the giant ‘Jewish’ Kabbalah / Kaaba / Cube they built in Mecca a decade later – the Black Cube a symbol of Saturn / eL/ the Lord.  “The Quran contains several verses regarding the origin of the Kaaba, it states that the Kaaba was the first House of Worship, and that it was built or re-built by Ibrahim and Ishmael on God’s instructions.” – straight out of the Jewish Old Testament. All of these religions serve the same purpose – to  divide and rule.

The Bible – or Bi-Bal (second book of Babylon) details how all nations will turn against Israel in ‘the last days’. So we appear to be watching these masonic  puppets in the West carry out instructions and set the stage for global conflict (Freemasonry essentially being Judaism for Goy). Nothing to do with helping the long suffering Palestinians. We will also see these masonic puppets ramp up the conflict with Russia at the same time. Putin will play his part also – another lover of little boys and masonic puppet in charge of the ‘Mother Land’ – Russia being the largest supplier of migrants to Israel – Russian is in fact the second language in Israel.

Putin kissing random young boys on the streets of Russia:

Putin giggles like a little boy when he meets WW3 partner Benjamin Netanyahu – who works for who?  As a general rule – if they are on your TV and wearing a suit, you can almost guarantee you are being lied to.

They are already using their masonic puppets in Australia to help destroy the ‘digger’ partnership between Australia and New Zealand:

And this ‘revolt’ at the UN was timed bang on for Christmas – another subtle form of terrorism, presumably so these vicious terrorists can threaten people across the West over their ‘holy day’ season.

Brainwashed Christians around the World – who have followed the  ‘prophecies’ of these violent bullies  since the script was written will all no doubt nod their heads and sing praise for the terrorist Israeli State – blissfully unaware of the true meaning of the word Israel in their Bibles – that being Isis – Ra and eL – purely a  reference to the heavens above and solar system, which is also replicated in the human brain. It is NOT some terrorist state of war criminals in the Middle East – that’s a so called ‘false idol’ that the Bible warns of. There are 7 levels to the Shakespearean literature in the Bible – but the struggling Christians are mostly only capable of understanding the first one or two – dumbed down with their dead animal/blood diets, new age pharmaceuticals and Zionist owned media.

And so the West will sit back and ‘pray’ for the terrorist ‘Jewish’ State and ‘poor persecuted ‘Jewish’ people – arguably the richest and most powerful people on Earth – as this theater plays out on their TV sets. Materialist, money loving ‘Christians’ worship those with the biggest smiles, best fashion and biggest houses – all of it false idol worship and in complete contradiction to what their Bibles tell them.

Media Whores has recently detailed evidence of advanced knowledge of the Christchurch Earthquakes, as well as the recent Kaikoura quakes, and yesterday we detailed how Israel and its masonic puppets have installed their technology systems through almost all NZ government agencies and departments as well as most telcos, internet companies and industry – we will have to wait and see what delights these terrorists have planned for us. Maybe they will take down the power grids? Or just switch off the eftpos system? Our money is on some HAARP created weather bombs and earthquakes – possibly on New Year’s Eve.

And if Israel strikes it will no doubt be blamed on someone else and these same brainwashed fools will eat up the mainstream media narrative, like drinking straight out of a broken toilet.

Unless by some ‘miracle’ humanity was to finally awaken from its dark ages slumber and realise that their is not just one God – God is in everything, everywhere, omnipresent – and the only law of ‘God’ is do no harm/ do not kill/ love thy neighbour (which is all the same law) – Reference.

But we are not holding our breath here at Media Whores – the script promises that the “10 horned beast” will be destroyed, those being the 10 Royal Families of Europe – all now toothless and infiltrated, allowing their nations to be destroyed with communist styles taxes and unrestrained immigration. And out of the ashes of the (Nazi) Phoenix – order out of chaos – will rise the “two horned beast” – that quite clearly being Israel and their Islamic / Sharia Law puppet Saudi Arabia.

The West needs to get off the script – or it will be marched off again to another fake / staged war for ‘God. Possibly followed by global Sharia Law – if Israel and Saudi Arabia are the ones left in charge.

Brainwashed Christians and TV addicts  need to realise these people are NOT victims – and they are playing us all like fiddles – all over again. The same as the did to Europe before wwii – when Israel rose out of the ashes of the carefully scripted chaos.

The ‘game’ of Monopoly –  ‘the bankers’ now own everything – are they planning to put it all back in the box? Note the black ringed hat of Saturn on ‘the banker’.

“There are several deceptions in the churches today and one of the most dominant is that Zionism is of the Lord, Zionism means Israel, and we are to protect Israel because those who bless Israel are blessed by the Lord, and those who curse Israel are cursed by the Lord. His words about blessing and cursing Israel are very true, but who is Israel? Is Zionism Israel today?

More on ‘eL’ – the Lord of the Bible – also known as Saturn/ Satan/ the Black Cube / 666 / Kaaba and Mecca…the jealous monotheistic ‘God’ of war, money $$, blood sacrifice and child abuse.

Israel Threatens to Wipe New Zealand Off the Map