Skip to content
We recently discovered dried strawberries. Not the sugar coated, preservative laden things you might have seen in the supermarket, but ones where strawberries are the only ingredients. I found them in Hardy’s Health food shop. They’re so sweet, it’s hard to believe there’s no added sugar. Anyway, I got thinking about how they would be a good substitute for glaced cherries in some Christmas recipes, and had a hazy memory of something called White Chrismas. 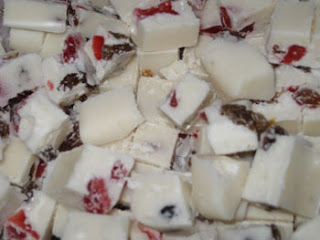 When I googled it, it turned out to be a rice bubble slice with glace cherries, Kremelta, and dessicated coconut and of course lots of icing sugar. So today I’ve been playing with versions of creamed coconut slice, and here’s what we’ve got so far. 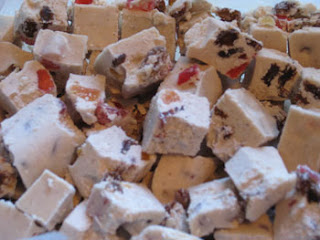 Version 1 used creamed coconut, coconut oil, vanilla essence, dried strawberries and sultanas. I didn’t add extra sweetener. It tasted ok, but nothing special, just an everyday slice. For version 2, I used cocoa butter instead of the coconut oil. I added some mixed spice, and replaced some of the strawberries with dried pawpaw (cos I didn’t have enough strawberries). It was much more Christmassy.
If you wanted extra sweetness, you could add a little honey. If you wanted some rice bubble like crunch, you could add some chopped nuts.
So here’s the final recipe – well, as final as these things get. I’ll probably tweak it again next time I make it. But we’ve got a lot of slice to eat before the next trial!
First, get your jar of creamed coconut softening in a bowl of hot water. (If you’ve got a jar already prepared, you won’t need to do this). Next, line a plastic container that’s about 15x20cm, or 12×25, or similar, with baking paper. Prepare your fruit: stir through the raisins and sultanas and remove any stalks; chop the rest into small pieces with kitchen scissors or a sharp knife. (note: choose fruits that are free of sweeteners and sulphites)
If you’re using nuts, chop them up.
When the creamed coconut is soft enough to get out of the jar, scrape it all into a food processor and zizz till smooth. You might need to jab any big bits with a knife to break them up a bit more, and zizz again. When it’s smooth, pour half back into the jar for another batch later on, or for adding to soups or stews.
If you’re using cocoa butter, grate that and add. Or just spoon in the right amount of coconut oil. Add the other flavourings and zizz till it’s all mixed together and smooth. Add the chopped fruit and nuts and pulse just enough to mix them in, but not mush them.
Pour into the container and mix around a bit to make sure the fruit and nuts are evenly dsitributed. Refrigerate for an hour or so, till hard. Lift the baking paper and contents onto a chopping board, and use a large knife to cut into small pieces, 1-1.5 cm wide. Gather up the corners of the paper, and you’ll be able to stuff the whole lot back into the container, put the lid on and back into the fridge.
If you want to make them look pretty, spoon the mixture into mini muffin patty pans that have been stuffed into mini muffin trays. Or use foil thingies that are designed for truffles.