Everything We Have Been Told Is A Lie – The Medical Industry Is Designed For Profit Not People!

We are taught to believe that the medical industry is there to heal us but sadly this is often not the case. Although there are many good Doctors trying hard to assist people, the medical industry sees patients as clients from which to generate profit. There are positives to western medicine but the industry has become riddled with corruption.

Pharmaceutical companies have a single aim which is to generate as much profit for their shareholders as possible. Big Pharma has no financial incentive to heal you because they would loose a client. In this post we will discuss the true agenda for Big Pharma and the corruption built into the industry.

Big Pharma belongs to the web of large holdings which has allowed a very small number of powerful families to own the majority of our world. This imbalance has caused death, destruction and disharmony on our planet. 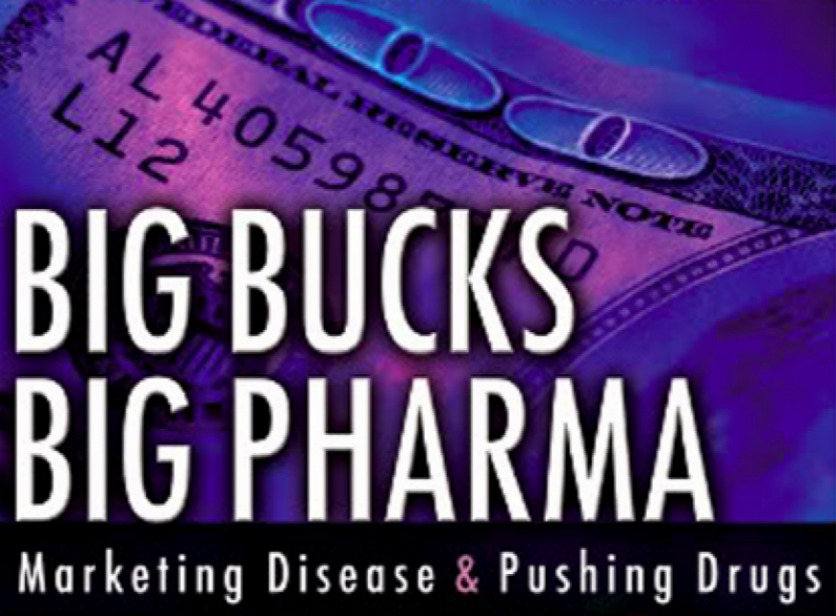 The Birth Of Big Pharma

Modern medicine and the Big Pharma cartel are relatively new phenomenons. In their short lifespan they have been guilty of almost every skullduggery known to humanity including murder. Contrary to acting for the benefit of humanity the industry avariciously covets profits. It is far more profitable to endlessly treat the symptoms rather than cure a disease. A prime founder of the industry was John D. Rockefeller who had already made enormous amounts of money with his Standard Oil company. Using his petrochemical products Rockefeller created chemicals which he sold as medicinal cures. Having once been quoted as saying “competition is a sin” Rockefeller set about removing any competition from medical practices which had been practiced previously. By this point the Supreme Court of the U.S. had already found Rockefeller and his trust guilty of corruption, illegal business practices and racketeering.

Rockefeller helped to define modern philanthropy with many large grants to Universities and trusts setting the stage for the corporate control of the medical schools and publications. This plan has largely been achieved globally and channels enormous wealth into the hands of a few people who control the industry. At every opportunity natural products have been patented or outlawed increasing the monopoly power of the cartel.

The primary function of the industry is to generate profit and that is most readily achieved by selling pills or procedures to people. Using natural remedies and cost effective cures does not factor into this equation. A trip to any chemist in the west today presents you shelves of expensive products but few if any of the natural and effective remedies which were available to our ancestors.

A telling indicator of the state of the industry today is that the pharmaceutical lobby is the biggest spender in the US, spending a whopping $240 million on lobbying last year. This gives you an indication of how much money is involved in the industry and the need for Big Pharma to push for laws and conditions which will maximise their profits. This situation reeks of corruption.

Corruption is rife throughout the industry and I witnessed it first hand when I organised an event for one of the world’s largest pharmaceutical companies. The event was held on a tropical island attended by 300 doctors. The doctors were allowed to bring their wives, families or mistresses with them to the event. Everything was paid for the doctors including flights, hotel, transfers, food and beverages. At the end of the week the pharmaceutical company signed off on the doctor’s yearly mandatory study hours. Practically none of the doctors attended the event and even if they had it was just a marketing exercise for the company’s products. The implicit agreement was that the doctors could have a free weeks holiday once a year and have their study hours validated if they continued to sell this company’s products. These doctors seemed to have forgotten their Hippocratic Oath! My post on this experience can be read here.

Fortuitously I was having dinner in Phnom Penh last night with two indian heads of generic pharmaceutical firms. Both confirmed with me that bribing doctors with trips or gifts is standard even in the generic pharmaceutical business. This corruption is normal! These two gentlemen believed that the gifts were necessary but if the product was inferior then doctors would stop prescribing it. I think they were kidding themselves. When there is money involved there are always people who will be influenced by the trips and gifts. Big Pharma pays for over 30,000 of these doctor events yearly in Australian alone!

Much of modern medicine has deteriorated to identifying a symptom and then prescribing a pharmaceutical to deal with that one particular issue. The veterinary industry is exactly the same. I spent many years working with horses and became disillusioned with veterinarians. I searched out a healer who could teach me about plants and found the natural cures to be more effective and cheaper than the pharmaceuticals for many conditions.

Some estimates put the yearly cost of pharmaceutical marketing in the US at $56 billion! This huge amount of money is spent to drive the profits of the industry. Combined with the enormous amount of money spent on lobbying it is clear how profitable this industry is. In Australia recently there were TV advertisements that advised people to see their doctor to be prescribed medication for nerve pain. What does that even mean? 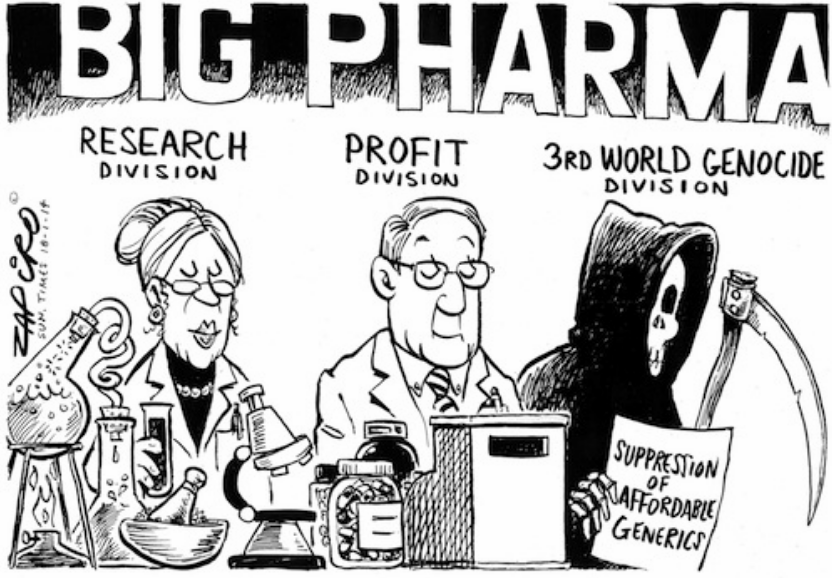 The medical industry is not only very profitable but it also contributes to the deaths and injury of enormous amounts of people. Between 1996 and 2001, American pharmaceutical giant Purdue Pharma held over than 40 national “pain management symposia” for thousands of medical professionals in idyllic locations. These all expenses paid trips increased sails of OxyContin tenfold and started the current opioid addiction crisis. Pushing this addictive product onto people is very profitable but amounts to nothing more than drug pushing.

By 2012, sales of prescription opioids grossed $11 billion in the US annually and insufficient regulatory oversight contributed to over 15,000 fatal overdoses! This is just one of numerous tragic stories that implicate the medical industry with corruption and contributing to human death and misery. The proposed merger of Monsanto and Bayer Pharmaceuticals would create a truly frightening company that could be very harmful to humans and the planet. This merger is indicative of the consolidation we see happening in all large industries. One half of this frightening company would poison our food and the other half would sell us drugs to deal with the illnesses caused by eating poisoned food. Terrifying!

Regulators are still discussing whether to allow the merger but with the extreme lobbying budgets of these two giants and the extended political influence they have I suspect we will see the merger go ahead. To be honest I believe that these large multinational companies are all owned at the top by a few vastly powerful and wealthy families which interlock. 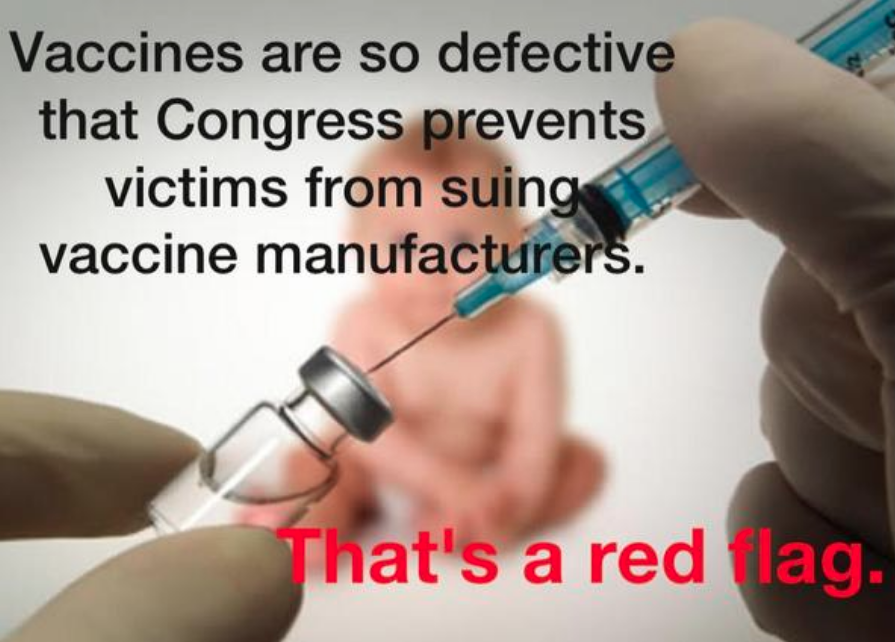 I know that the topic of vaccination is contentious and I also have an understanding of what the sentiment towards vaccines here on Steemit is. The topic has been covered at length but I just wish to raise a few points which are worth considering about vaccines.

The concept of herd immunity is often used to justify vaccinations. However a massive percentage of the population in places like Australia, the US and UK flies in and out of the country each year as tourists but none of these people are checked for vaccinations. How does this impact the concept of herd immunity? To me it seems to negate the concept. Can someone please explain this to me?

Should you be looking for more quality information on the vaccine debate I can highly recommend following the feed of @canadian-coconut! 😃 The Cycle Of Money

This colossus of an industry generates enormous volumes of money for the owners. This money is then redistributed to push for more profits. Money is spent in two directions. Firstly on lobbying with the pharmaceutical lobby being the biggest of all lobby groups in the US. This gives Big Pharma powerful influence over the government and allows them to push for laws which are favourable to them and increase profits.

Secondly the money is spent on advertising. In 2015 pharmaceutical advertising rose to $5.2 billion and there seems no sign of this trend reversing. This huge amount of money gives the pharmaceutical industry enormous influence over the already corrupt media industry. My intuition tells me that at the top both industries are controlled by the same people. The influence over the media means news stories which are not favourable towards Big Pharma are often suppressed and important information withheld from the public. News can also be skewed to be favourable for the industry and I suspect that this kind of information manipulation is happening with the vaccine debate.

All this money sloshing around to push for more profits and the cycle begins again. The concept of healing does not have a place in this process the driving factor is profit not people! 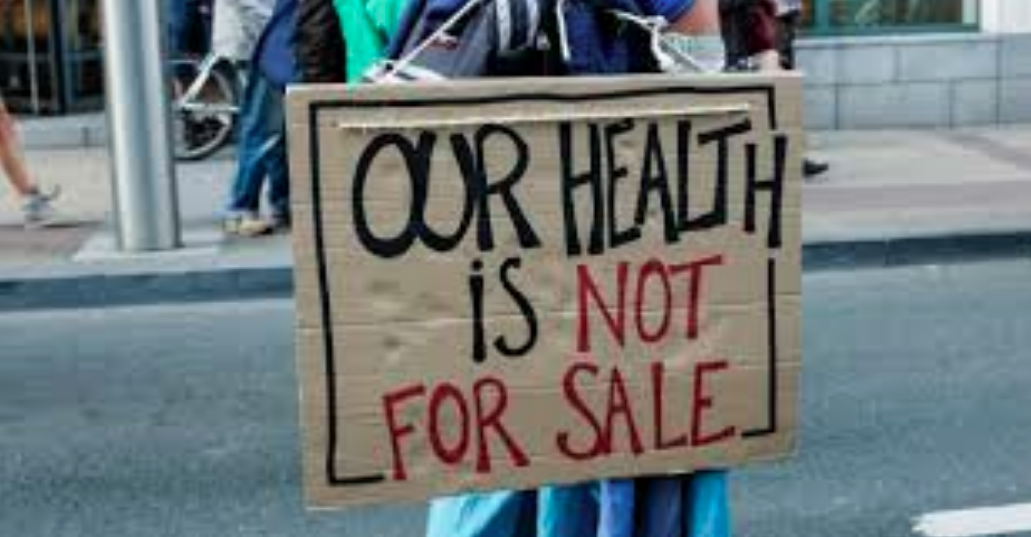 What Can We Do To Heal The Situation?

One of the most interesting studies for me has been learning about natural healing. Plants are powerful and have enormous healing properties. The knowledge of plant medicine is ancient and deserves much more respect than it gets. After all many pharmaceuticals are based around plants. There is a lot of valuable information online but it is important to remember that some plants can harm you if used incorrectly. The best thing to do is find people who already know about plants and talk with them. These people are not as common as they used to be before in our western cities but they are around if you look for them.

I do not wish this post to be a criticism of all doctors and professionals working in the medical industry because there are some amazing hard working people who dedicated themselves to the alleviation of illness and pain in others. I have doctors in my family and they agree with my perspective on corruption within the industry. What I see here is that Big Pharma has corrupted the medical industry. The relentless push for profits inevitably puts the welfare of patients second.

With the use of simple traditional remedies many common ailments can be effectively naturally treated cost effectively. One product that I find extremely effective which I make and use myself is Colloidal Silver. I will do a post soon on my experience with this product. Natural cures are excellent but mostly staying healthy is about eating clean healthy food and regular exercise! 😉