The censorship Berlin Wall on vaccine injuries is starting to crumble… in the UK, at least, where mainstream media outlets there are suddenly covering the thousands of young girls and boys who are routinely damaged by toxic vaccines. 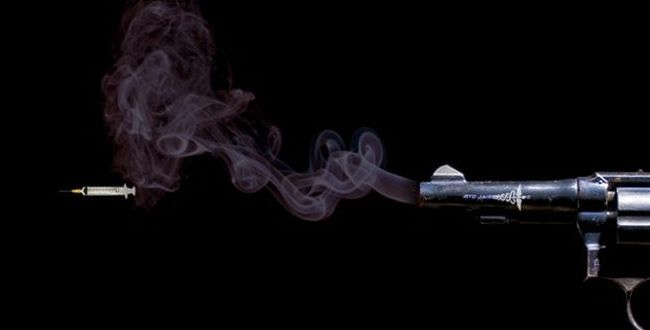 Junk science media outlets like the Washington Post – now entirely controlled by Monsanto – attack vaccine skeptics as anti-science people for pointing out that children are being maimed and sometimes killed by vaccines.

See Hundreds of children brain damaged by the swine flu vaccine to receive $90 million in financial compensation from UK government.

Check out what’s happening in the UK press now all of a sudden. No doubt the vaccine industry is pushing hard to censor all these stories, so you might want to check them quickly while they still exist online: (h/t to Health Impact News for pointing these out) 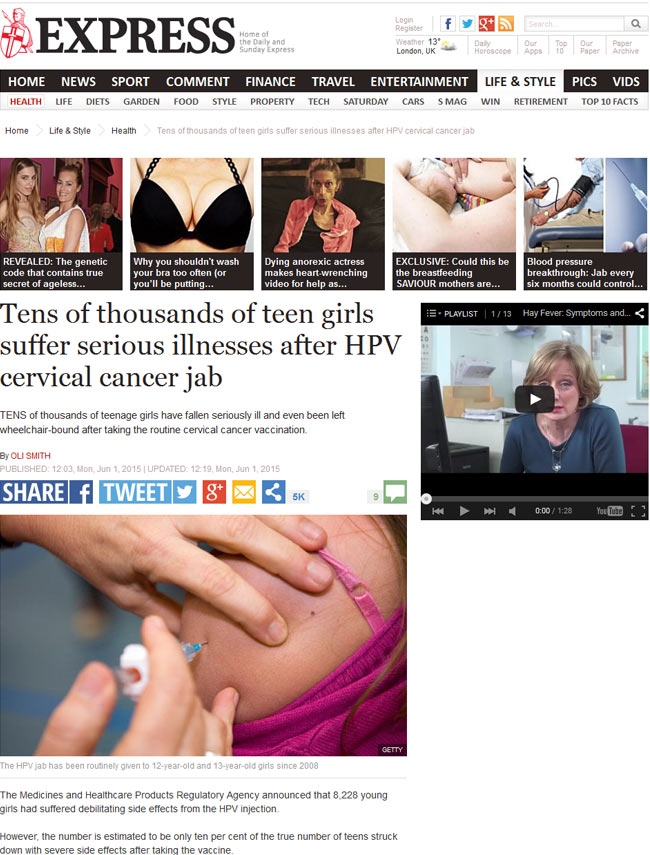 “TENS of thousands of teenage girls have fallen seriously ill and even been left wheelchair-bound after taking the routine cervical cancer vaccination.”

“…the number is estimated to be only ten per cent of the true number of teens struck down with severe side effects after taking the vaccine.”

“In more than a quarter of the cases, the effects have apparently been so severe that they were considered ‘life-threatening’ and required immediate medical treatment.” 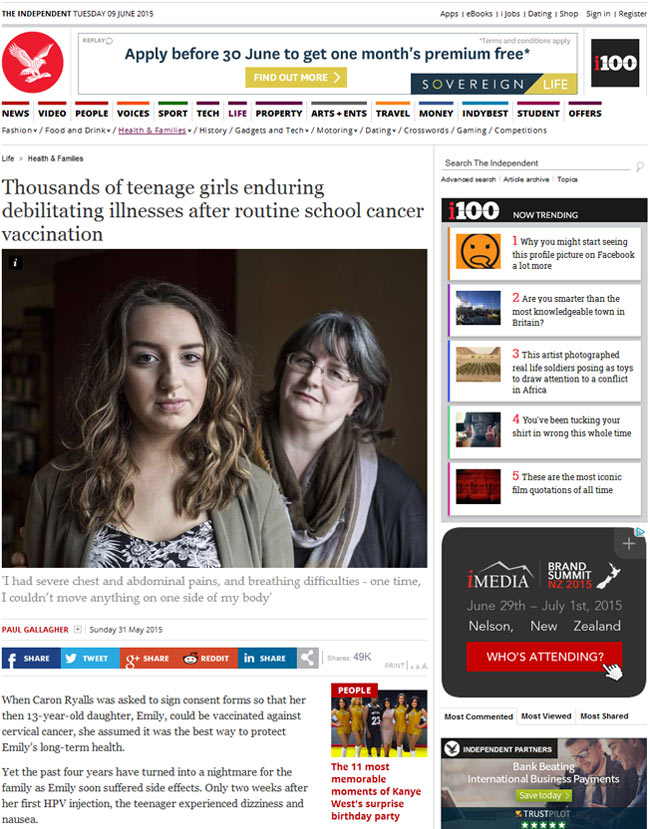 “Emily is one of the thousands of teenage girls who have endured debilitating illnesses following the routine immunisation. She is yet to recover and has no idea when her health will return to normal.”

”In the 10 years to April this year the agency received almost 22,000 ‘spontaneous suspected’ adverse drug reaction (ADR) reports in 13 routine immunisation categories including flu, MMR, tetanus, diphtheria and polio, according to a Freedom of Information response released earlier this month.”

PoTS and fibromyalgia are among the diseases he believes have developed after HPV vaccination, and that clinicians should be aware of the possible association between HPV vaccination and the development of these ‘difficult to diagnose’ painful syndromes.” 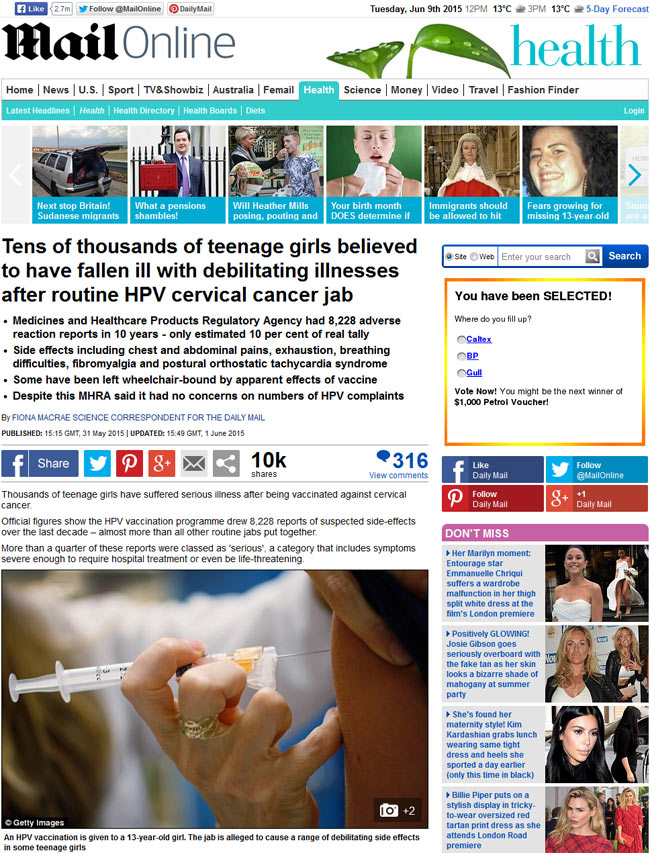 ”Some have been left wheelchair-bound by apparent effects of vaccine.”

“Worried mothers have told how their previously healthy daughters have suffered fits, extreme tiredness and even been left wheelchair-bound after being vaccinated in their early teens. In some cases, the girls started to feel ill on the day they were vaccinated. Others became sick several weeks later.”

In the US, Canada and the rest of the English-speaking world, questioning vaccine safety is a taboo subject, one the mainstream press fears to touch, let alone to debate. Not so in France…

“Should we have doubts about vaccines?” asked a popular radio program last month, marking European Immunization Week. The program, which ran on France Inter, a major public channel that is part of Radio France, introduced the subject by acknowledging the “doubts and concerns about the usefulness of vaccines” that have led the French to have “less and less confidence in vaccines.” France Inter then held a no-holds-barred debate between a controversial proponent of increased vaccine use…

[Another] example comes from Le Figaro, France’s second largest daily. After the French press last month reported that two infants died and hundreds had been injured after receiving rotavirus vaccines, Figaro examined the various issues at play, including conflict of interest — government regulators have had pharmaceutical industry ties — and the wisdom of having these vaccines recommended by public health authorities.

All this vaccine violence being committed against children worldwide is purely imaginary, according to the U.S. mainstream media.

Anyone even citing such statistics is automatically labeled “anti-science” by pathetic vaccine pushers who profit from the continued medical mutilation of innocent children.

I’ve even heard the idea of vaccine damage being labeled a “conspiracy theory” by the pro-pharma media — the same media that conducted a total nationwide news blackout on the public admission of a CDC whistleblower scientist who admitted that he took part in a CDC cover-up to hide links between vaccines and autism.

That’s how loony the corporate-controlled media has become: They label you a “conspiracy theorist” if you practice good science and good medicine by observing biological reactions to a routine medical intervention. Meanwhile, what they report as “facts” are actually fairytale delusions… such as the idea that vaccines harm no one and can be safely given to children in essentially unlimited quantities.

The real anti-science kooks, it turns out, are the blindly obedient vaccine pushers! (They also happen to be extremely angry egomaniacs who reek of vile hatred for humanity… and of children specifically.)

While tens of thousands of injured young children is no laughing matter, it is rather hilarious that the U.S. mainstream media’s obedience to the total quackery of “vaccine safety” is causing its own rapid loss of credibility, readership and revenues. That’s why the value of old media publishers is rapidly collapsing while, at the same time, alternative media websites are exploding in popularity.

THANK YOU, lamestream media, for creating the journalism vacuum now being filled by independent media outlets like Natural News — websites that never would have grown at all if the media had been doing its job in the first place.

And what do we want to see with vaccines here in the New Media? We’re not opposed to the theory of immunization, and we most certainly aren’t opposed to good science (I’m the science lab director of the Natural News Forensic Food Lab, conducting PhD-level atomic spectrometry analysis and original research on heavy metals in foods).

We merely want to see all toxic chemicals and heavy metals removed from vaccines and for government to respect parents’ rights in deciding what medical interventions are best for their own children. It doesn’t sound like much of a demand, really. It’s just a demand for protecting children and respecting fundamental civil rights.

I never thought I’d see the day that demanding we stop poisoning children with mercury in flu shots is called “anti-science.” But here we are, and that just tells you how insane the monopoly-run, criminal-minded vaccine industry has become these days. No wonder the public craves truthful reporting on this subject!

BOTTOM LINE: Any media outlet that tells you vaccines are safe is knowingly committing journalistic malpractice and lying to your face. They are paid by Big Pharma to tell such lies, and they knowingly put children in harm’s way for their own selfish profits.

Even the ethically challenged vaccine pushers they roll out to push vaccines – people like Paul Offit – totally abandon ethics by failing to disclose their own financial ties to the vaccine industry when they’re interviewed on TV.

Here’s an important takeaway point on all this: Never read the U.S. mainstream media for any purpose other than tabloid entertainment. Most mainstream outlets are totally clueless, compromised and corrupted.

Although there are intelligent reporters who work inside the U.S. media, they are handcuffed by censorship and editorial directives that prevent them from reporting the truth on GMOs, vaccines and other important topics.

(I know this because many of them have come to me asking for work and explaining the kind of Orwellian censorship under which they operate. You would not believe the number of formerly mainstream media reporters who now work for Natural News… and the number is growing by the week right now as we keep expanding…)

If you want news about the USA from a mainstream source, start reading the Daily Mail (UK). Or check out Der Spiegel, Al Jazeera, RT, Sputnik News or The Intercept. You’ll never get accurate news about the U.S. vaccine industry from the U.S. sellout media.

They are just propaganda tools of the drug makers, and they’re more than willing to see children harmed and even killed as long as they get their precious ad revenue from Big Pharma.

This Vaccine Racket Infographic details the financial connections behind the criminally-run vaccine industry.

The infographic documents the nefarious players of the vaccine industry: the mainstream media, the CDC, deceitful vaccine propagandists like Paul Offit, the secretive vaccine court, the cover-up of vaccine-injured children, mainstream media propaganda that programs the public to worship vaccines, and much more.

I first sketched out this Vaccine Racket Infographic after observing the behavior of all the key players in the contrived Disneyland measles outbreak, which was used as a public panic springboard to launch a series of government-enforced vaccine mandate legislation efforts across the country.

Every player in the vaccine racket played its role in that “medical theater” episode, displaying uncanny coordination and a well-funded ability to gin up the kind of fear mongering that’s only pursued when corporate profits are at stake.

Here’s a scaled-down edition of the infographic. Click it to view a larger image: 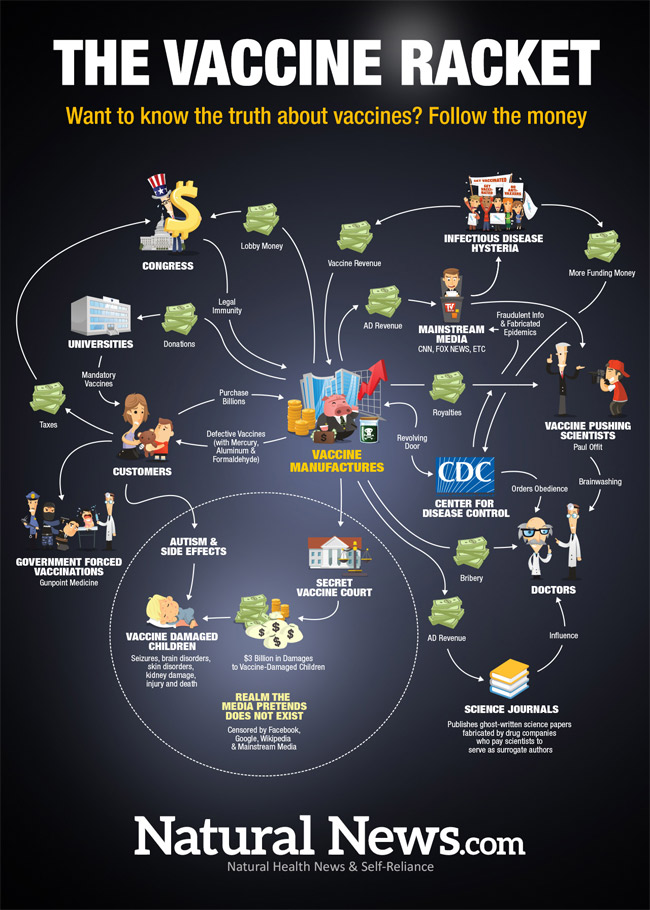 While you’re examining the runaway criminality of the vaccine racket, don’t forget the CDC-linked fugitive from justice known as Poul Thorsen, who absconded with millions of dollars in federal vaccine research funds (after faking vaccine research for the CDC to downplay the links between vaccines and autism). 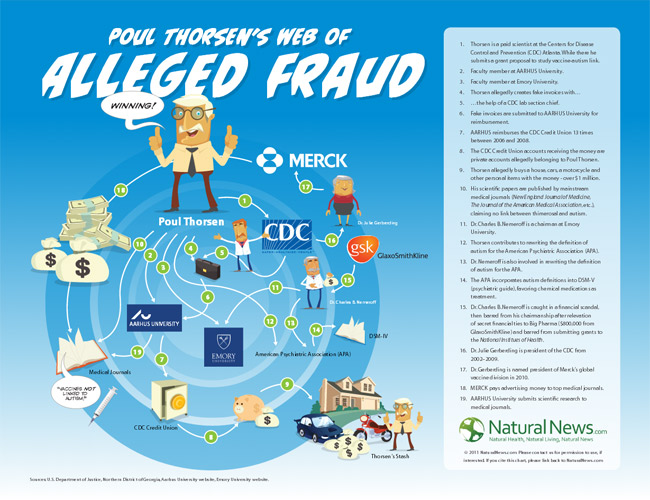 She Did the Vaccine Research-You Won’t Believe What She Found!

Dr. Sherry Tenpenny has spent many hours studying the effects of vaccines. The list of side effects is long, and that’s just for one vaccine she mentions here! Find out what she found and what potential dangers might be!