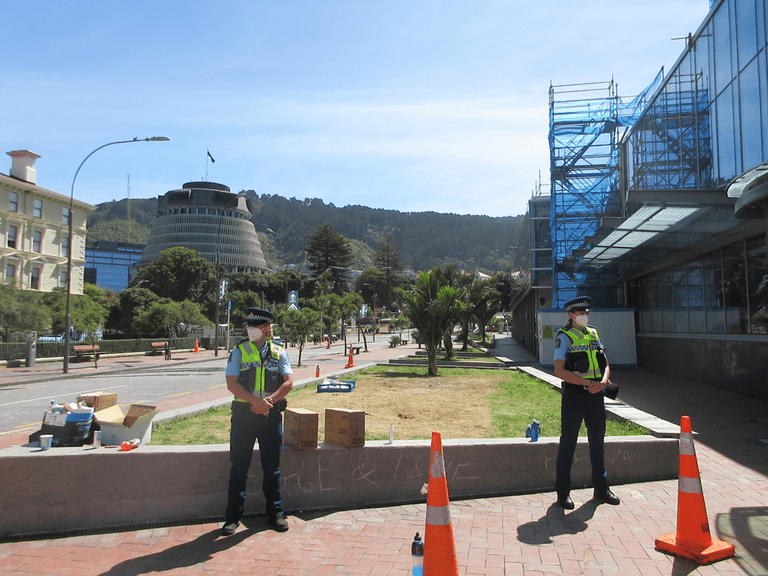 On Day 24, I walked around the perimeter, as much as I could get to. I stood in front of some of the police and spoke to them of my fervent hope that it was overseas troops who were so brutal, that it would break my heart to know that it was our police. They did not respond.

As well as guarding the perimeter, there were squads of police patrolling the city, some with dogs. Why dogs? Were they searching for dirty, smelly unjabbed people? Was it for intimidation? I was taking a photo of the inside of the law school grounds and a woman in a mask stopped to ask if I was recording the aftermath. I spoke of what had happened the day before. She hadn’t heard and was appalled and horrified. She spoke of her mother’s vaccine injury, and how she didn’t want to have the booster. As far as I can see, the only damage to the law school grounds was some chalk drawings…

Later that day, I saw a video of Ardern finally setting foot in Parliament grounds and felt such a wave of hate and revulsion. A person filled with hate is the opposite of the person I want to be. In bed that night, I shed tears of grief.

On Day 25, I was awake at 2am, writing an open letter to Police Commissioner Coster. I don’t know yet if it will see the light of day. Many others have no doubt written more eloquently, but maybe he needs to see many people’s thoughts.

I was a wreck all day, physically and emotionally drained. I could barely speak without crying. It was a day for rest and allowing myself to feel. And just think how much worse it was for those who had been living in the village, and held the front line. Those who ended the day beaten, bloody, bruised and broken. Those who are still feeling traumatised and lost.

Now on Day 26, it was time for me to use the tools in my toolkit, to raise myself back up. I hope to see some of the other local freedom lovers over the weekend – we need each other now, more than ever.

When I was blogging more regularly, I wrote about Emotional Freedom Technique (EFT or tapping) and some of the other tools I use to stay balanced emotionally. Today I chose the Access Consciousness Clearing Statement to clear feelings of grief, anger, hate and shame. I used Ho’oponopono to choose to make my way back to feelings of love, peace and forgiveness.

That resolve was tested again, early this evening, when I learn that police had hunted down some of the remaining protestors, who had taken refuge in a freedom camping area in Wainuiomata. Obviously, it is a different definition of freedom, as they have been evicted. Right now, I am feeling such deep sadness at the lack of compassion.

When I started blogging again just under a month ago, I wanted to have a permanent record on the blockchain, of the other side of the narrative. The truth, as I have perceived it, of what was really taking place. There is still a lot to say. I have written so many posts in my head and on scraps of paper over the last couple of days. Most of them are probably lost for ever. But I will write more over the coming days and weeks of what I witnessed and felt.

I may also share words and images from others. Let’s start with these beautiful words and an image from Anna Webster I don’t know Anna, but I would like to.

Then
We united.
We rose up.
We built a village.
We found our people.
We belonged somewhere again.
We felt loved.
We felt supported.
We felt peace.
Immense peace.

After 2 years of turmoil and upheaval.
Big losses- jobs, homes, friends, family.
Some forever gone.
But we finally found belonging…

Until
The police came in and tore it all down.
Beating us, spraying us, shooting us and dragging us.
What an ugly, shameful day.

We sit now with our pain and trauma.
Displaced, jobless, dazed.
Aching hearts, tired heads.
Frustrated at the gaslighting and lies.

But
We aren’t done yet.
From the ashes we will rise.
Again. I will also share some of the recipes that my friends made to nurture the village, and some of those who have been trying to find a safe place to recover, over the last few days.

I want to share some music – some songs of freedom many of you already know, and some original kiwi music. This is one of the songs that speaks of why we were there.