A former top official at New Plymouth’s Ivon Watkins Dow chemical factory has confirmed the worst fears of residents – part of the town may be sitting on a secret toxic waste dump containing the deadly Vietnam War defoliant Agent Orange.

The official, who has proven his identity and executive ranking in documents provided to Investigate, says the company owned a large piece of land ‘very close to the chemical plant, which we called ‘the Experimental Farm’. We bulldozed big pits and dumped thousands of tonnes of chemicals there.”

And what did the chemical cocktail include?

. . . Time, and a realisation that the chemical was more deadly than he or his colleagues at IWD realised, have changed his opinion. “It is time for the truth to emerge. Something needs to be done,” he says.
Investigate approached Health Minister Annette King who has so far proved reluctant to dig into the matter, and asked if she would be prepared to consider granting the former official immunity if he testified at a Royal Commission of Inquiry into the matter. So far, the Minister has failed to respond.
At stake for the government could be massive compensation payments: these are the same herbicides used on most farms throughout New Zealand, chemicals which may explain a sudden explosion in birth defects and chronic illnesses in children and adults from the 1960s onward. The cost in health bills to the country over the past 30 years may far exceed what the Government spends on tobacco related illnesses or car crashes, which may also explain the expensive TV advertising campaigns – a distraction from the bigger issue.
The former IWD boss says he and his colleagues all had shareholdings in the company, something he believes was an effective means of buying silence and loyalty.
Among the documents provided by the official is a copy of IWD’s 1967 Annual Report, which discloses that the company purchased 400 acres of land to use for experimenting with herbicides and pesticides. This included a 300 acre dairy farm stretching south from the main chemical factory, a 90 acre “research farm” at Waireka Stream, and a 12 acre research farm at Junction Rd in New Plymouth. This was in addition to the 29 acres that the factory originally sat on in Paritutu.
‘Possession of the new research station,” wrote IWD Managing Director Dan Watkins in his report to shareholders in 1967, “and the developed area at Junction Rd, as well as the 300 acre Beach Road Dairy Farm helps materially in keeping us close to all types of farming and to all means of production from the soil. Thus we are able to evaluate critically new methods of pasture and crop protection with insecticides and weed control with herbicides, as well as means of raising production by the use of fertilisers.”
But while Prime Minister Helen Clark’s colonial government continues to duck for cover, it’s been revealed dying Vietnam War veterans are threatening to “do a Timothy McVeigh’ – a reference to the American anti-government protestor allegedly responsible for blowing up the federal building in Oklahoma City several years ago. 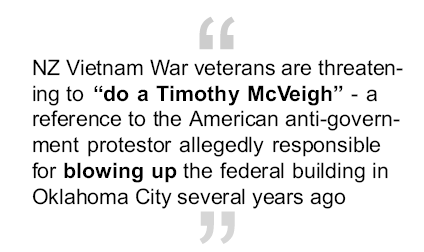 . . . passions are running so high that he and his colleagues have had to work “damned hard” recently to persuade dying veterans whose children have also been affected by dioxin-related deformities, “not to take the law into their own hands. These guys have had enough. They’re being cheated and lied to by the politicians and the bureaucrats.’
US health authorities have recently added diabetes to the list of diseases caused by dioxin, and Moller points out that the massive rate of diabetes in the Maori community may be a direct result of exposure to the 2,4-D and 2,4,5-T herbicides.
“Go back two or three decades and a lot of Maori people were working outside, as farmhands, labourers, railway workers, soldiers, forestry workers – all of them in areas where they came into contact with chemicals containing dioxin.”
And the point about dioxin is that it doesn’t just affect the person originally exposed, it affects their children through several generations as well.
There is evidence, still being collated by Investigate, of politicians having financial links to chemical manufacturers in the past, which may also be a factor in why successive governments have either been reluctant to investigate, or they’ve set up dodgy, “Yes Minister” type inquiries designed to prolong the cover-up.
Meanwhile, environmental campaigner and Paritutu resident Andrew Gibbs, whose investigations brought the disaster to light, is researching the involvement of Broadbank Corporation as the developer of Paritutu subdivision, and whether it knew or should have known it was building houses on a toxic dump. Broadbank was managed at the time by Don Brash, the man who is now
Governor of the Reserve Bank.