“Open your eye!,” Tilda Swinton’s version of the Ancient One intones as she presses against Dr Stephen Strange’s forehead, activating his pineal gland and sending him on a trip beyond the infinite that, even in these CG-saturated times, could only be described as “far out”. It is one of many extended psychedelic sequences that makes Doctor Strange one of the headier films to play in wide release.

Marvel’s latest yarn features the Sherlock star as a surgeon who battles evil with the help of martial arts, knuckle dusters and a mysterious ancient guru
The common complaint about Marvel Studios’ films is that, for all their high-tech armor and speed-of-sound slugfests, they tend to be tempered in the visual department. The plot and exposition scenes in Scott Derrickson’s Doctor Strange don’t do much to break that mold, but when the story necessitates special effects to step in, the spacey spirits of comics visionaries like Jack Kirby finally get their day at the multiplex.

Doctor Strange was always an outlier in funnybooks. While it had the typical goofy Stan Lee patter (“By the Mystic Moons of Munnopor!” “By the Wondrous Winds of Watoomb!” and “By the Hoary Hosts of Hoggoth!”, to offer a sample set), its eastern setting and emphasis on mystical powers were, for 1963, just right for burgeoning hippies who wanted to expand their minds but also didn’t want to read actual books.

The psychedelic entanglement got a push in its early days by two kinda-sorta secret connections between the comic and the heaviest acid-rock band of all, pre-Dark Side of the Moon era Pink Floyd. Perhaps the nicest grace note in Scott Derrickson’s film is the wink to those in the know, man.

Pink Floyd’s second album, A Saucerful of Secrets, transitioned between the visionary founder Syd Barrett (a victim of 60s overindulgence hit hard by LSD use) to one of the greatest guitar players who ever lived, David Gilmour. Released in June 1968, the album’s cover, created by the graphic designers known as Hipgnosis, is an abstract expressionist collage rightly suited for low lighting, incense, headphones and a plunge into the plasma pool of one’s own mindscape.

But the recurring spheres on the left-hand side (one of which contains a silhouette of our poet-warrior-rockers, who recorded tracks such as Set the Controls for the Heart of the Sun and Let There Be More Light) certainly tripped a memory for keen readers of the four-color art. Further scrutiny showed the Sorcerer Supreme himself blended onto the cover (at the top right) as well as one of his deadliest foes (top left). 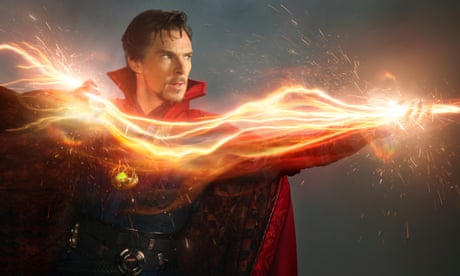 Strange Tales #158, released in July 1967, featured two stories. One involved a shirtless Nick Fury fighting a Hydra citadel that shot out Death Spores of Havoc and Inexorable Violence in a Blinding Helix of Light (comics!). The other story, The Sands of Death, illustrated by Marie Severin and written by Roy Thomas, saw Doctor Strange battling the Living Tribunal, a cosmic being who sits in judgment over the Multiverse. The Living Tribunal addresses Doctor Strange by bellowing: “Now shall be pronounced the Incantation of Oblivion and your puny planet shall exist – NEVERMORE!!”

Six pages in, things get really freaky and the Living Tribunal offers Doctor Strange a vision of our world’s imminent demise. Floating in a boundless inter-dimensional phase space, Strange sees an “S” of earths collapsing into red cosmic dust, headed toward a galactic spire of doom. Clearly this is an image meant for rock’n’roll, and it was this panel that Hipgnosis designer Storm Thorgerson incorporated into the album cover.

Soon thereafter, Pink Floyd did a great deal of work with non-Hollywood film-makers. They and the Grateful Dead contributed to Michelangelo Antonioni’s counter-culture opus Zabriskie Point. (Yes, that furious rock number you hear as the house with all the loaves of Wonder Bread blows up is a re-tooling of the Floyd staple Careful With That Axe, Eugene.) They collaborated with Barbet Schroeder twice. Most memorable was the outstanding hippies-in-New Guinea picture La Vallée, which begat the 1972 Floyd album Obscured by Clouds (that term being what was used on maps for where the film’s journey led.)

Summer 1969, however, saw the release of More, a film little remembered today but quite a success in Europe at the time, dealing with disillusioned students, sex and drug addiction. (A German post-grad shacks up with a sexy American gal in Paris, and they both escape to Ibiza before it fell to a phalanx of techno clubs.)

The soundtrack to More has some typical instrumental jams of the period, a tune called The Nile Song which, quite out of character for Pink Floyd, borders on Stooges-like heavy rock, and a lovely ballad featuring bongoes called Cymbaline. Written by Roger Waters but sung by David Gilmour, Cymbaline pops up in the film when a sexy 60s chick gets out of her bed in her Paris apartment, puts on a record, changes her clothes, shouts “Groovy!” and rolls a joint. For those who fetishize the hippy era, this scene essentially slams the pleasure centers of the brain with a ball-peen hammer. And amid all the nature imagery in the lyrics there are the lines: “The leaves are heavy round your feet / You hear the thunder of the train / Suddenly it strikes you / That they’re moving into range/ And Doctor Strange is always changing size.” Far out. If Doctor Strange is cool enough to be in this scene, he’s cool enough for anything.

It’s a long way from Barbet Schroeder to the Marvel Cinematic Universe, but the new Doctor Strange does its best to represent its roots. Its first music cues go more for the joke (Shining Star by – dig this – Earth, Wind & Fire) but when there’s a transition that needs a little oomph – right before the good doctor has his car crash that leads him on his eastern quest – there’s the feedback wail from Pink Floyd’s Interstellar Overdrive. 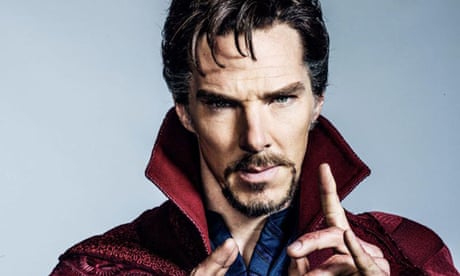 One of Floyd’s earliest tunes, this upbeat instrumental rocker clocks in at close to 10 minutes on their debut album The Piper at the Gates of Dawn. In live performances, it could stretch out even longer (see the 17-minute version on the Tonite Let’s All Make Love In London … Plus release). It’s a psychedelic jam that has no business being in a movie aimed at a mainstream teen and preteen market, but if you only hear the first minute or two it sounds like perfectly serviceable guitar rock. (Might I suggest listening to the whole thing, though, especially on headphones, as by the end the washes of noise fade from one side of your skull to the other.)