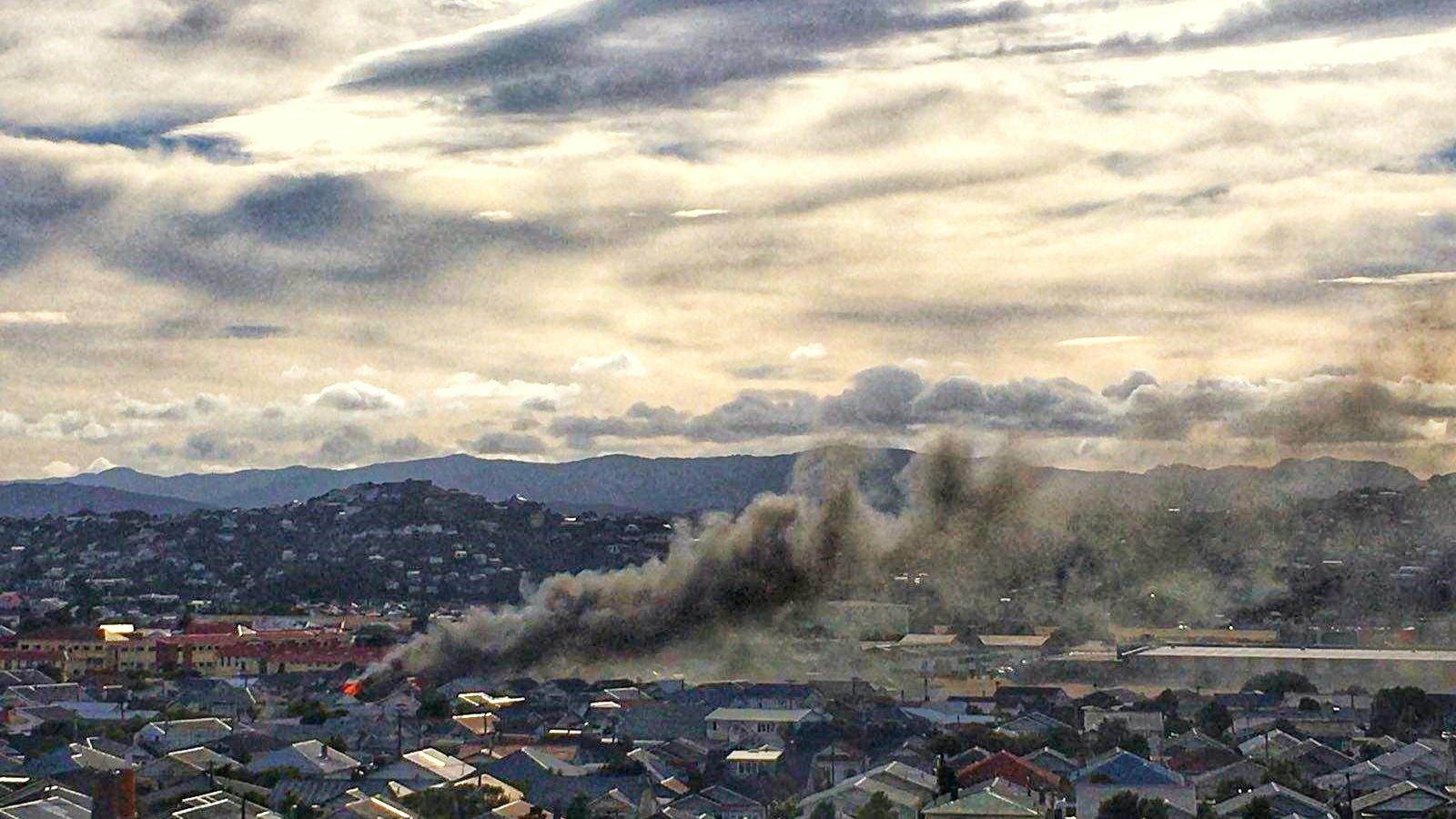 Last week, a house near to us caught fire and completely burned down. It burned for over an hour and filled the sky with smoke.

Living on the hillside with a pretty good view of the surrounding area, we get to watch this interesting sort of stuff. But these two photos were taken by a friend who lives higher up the hill and has a clearer view with no trees in the way (thanks Carla) Almost as soon as the smoke cleared, it started raining, and rained heavily for three days straight, so we only just got around to walking over for a closer look. Despite the fact that most houses in New Zealand are wooden, it’s actually very rare to see one completely burn down. Especially in Wellington where we have a very good fire service. Although they were not able to save this house, they did manage to stop two very close neighbouring houses from catching alight. Just how did this fire start? After a month of hot summer weather and no rain, an idiot house painter decided to use blow torch to strip the paint off. (WTF?) Stupid is as stupid does… The suburb of Kilbirnie where we live is quite close to the central city and was mostly built between 1920 and 1930. This burned down house would have been built around 1922, so was about 100 years old.

Originally built as compact working class houses, they now sell for over NZ$1 million (US$700k) because New Zealand has some of the highest priced housing in the world, and Wellington is the second dearest place in NZ. Thankfully Wellington does also have the highest average wages, so is better off in that regard than Auckland, NZ’s largest city, which has the dearest house prices but a lower average wage.

This nearby two bedroom cottage is currently for sale, and has a rateable value of NZ$1,190,000. I fully expect the NZ property market to crash this year, the insane house prices are a primed to go pop, and I anticipate that crash being a major part of the deliberate destruction of our economy.

Prior to WW1 Kilbirnie was mostly sand dunes and farmland for 60 years from 1855 to 1915. So what was it before 1855?, you might ask. In 1855 Wellington had a massive earthquake that flattened pretty much every building here in the future capital city, and also raised all the land by two meters. Before that, most of Kilbirnie was an area of shallow water. It’s hard to even imagine what an earthquake of that magnitude would feel like, but I’d guess it would feel like being picked up by the hand of an angry giant and shaken so violently you wouldn’t know which way was up.

And back in 1855 there were no emergency services, just horses and carts on dirt roads, and no real medical care either. Those people were much tougher than we are! Wellington city just before it was completly flattened in 1855

Part of the reason NZ has paid attention to having good fire services for the past century is that there have been some fairly major historic fires that spread from house to house. Although not quite the great fire of London, there were some nasty ones, and a lot of houses did burn down. Although we are on the other side of the world, WW1 and WW2 had a huge effect on Australia and New Zealand, which were both used as cannon fodder for the globalists even way back then… We actually had some of the highest death rates per head of population in WW1 because so many young men were shipped over to Europe to be shot up over a worthless strip of mud. So from 1850 to 1950 the people of NZ, just like in many other countries, were beaten down repeatedly, yet still managed to rise up and build a thriving country. From 1950 to 2020 NZ was one of the best places in the world to live – 70 great years!

Not so great now though, because 2022 NZ is literally on it’s knees, with a corrupt globalist dictatorship for a government, some of the most full on mind programming in human history being tested on us, and a huge sector of the population now either fully injected rabid covid cult members, or just going along with the psyop in a desperate attempt to keep their jobs and “get back to normal”. But “normal” is over and will never be coming back. Right now our entire society and economy is burning down, just like that house. And we are going to have to rebuild everything. After 70 years of the good life this is going to be a real shock. Our ancestors were as hard as nails and they were used to this sort of stuff, but we are not.

The protests here are really only just getting started, and the first thing the masses are about to see is that everything they are being told by the media is utter horseshit. Today the first NZ convoy (which has been totally ignored by the NZ media) will roll into Wellington, and although it may not be up to Canadian standards, things could get interesting from this point. Maybe those of us who can see at least part of what is going on, are here at this time in history for a reason and now is our time to shine. We may not be as hard as nails, but we do have a few tricks up our sleeves. (Like rapid communication). Let’s rise to this challenge! Lyall Bay beach, where I was looking out to sea and thinking about some of this stuff yesterday