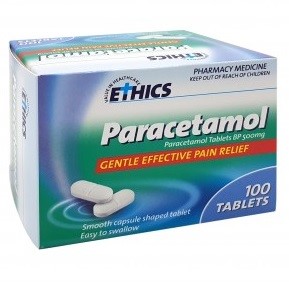 This toxic chemical has been rolling around since WW II, when U.S. manufacturers first “obtained” the patent from a German chemical company that manufactured toxic dyes. McNeil Labs of Philadelphia then developed acetaminophen into a drug and sold it off to Johnson & Johnson at a huge profit, founding another Philadelphia medical dynasty of ill-gotten gains.

Since then, J&J has been hiding this toxic drug in various products, often combining it with other pain-relieving drugs such as codeine. This ploy hides the fact that Tylenol doesn’t actually work for pain. (More on that in just a moment.)

In the late 1970s, I worked with NASA’s astrobiology programs. I helped develop testing procedures to detect blood levels of this drug using state-of-the-art analytical instruments. And even back then, we considered Tylenol a toxic chemical. In fact, we included it in a “toxicology panel” to detect poisons.

In the early 1980s, when I worked as a hospital pathologist, I witnessed deaths due to liver failure caused by this drug. When I reported them to the local Medical Examiner, they replied with a yawn that they see such deaths all the time! Later, as a Medical Examiner myself, and as a consulting forensic pathologist and toxicologist, I encountered many more cases.

But I wasn’t the only one.

In the new report, researchers from the U.K. conducted a systematic review of 1,888 studies to document the adverse events associated with Tylenol. The adverse events reported included deaths, as well as toxicity to the heart, GI tract and kidneys.

In this review, eight studies followed participants prospectively over time. I consider these kinds of studies–based on long-term actual observations–the most authoritative.

In studies that examined mortality risk, the death rate for men and women who used Tylenol was 90 percent higher than those who didn’t use the drug. Another study showed a dose-response relationship, meaning the more of the drug the patient took, the higher their risk of death.

For GI toxicity, one study reported patients who took the lowest doses of Tylenol ran about a 10 percent increased risk of suffering bleeding and other complications. On the other hand, men and women who took Tylenol at the higher dose range ran a 50 percent greater chance of suffering these dangerous complications.

In terms of kidney damage, four studies found adverse effects, and three studies found a dose-response. Overall, researchers linked the drug to a 30 percent decrease in kidney function. At the lower doses, men and women ran a 40 percent greater risk of damaged kidney function, on average. And at the higher doses, they ran 120 percent greater risk, on average. In some cases, the actual risk was as much as 240 percent higher.

Amazingly, acetaminophen (called paracetamol outside the U.S.) is the most widely used over-the-counter (OTC) and prescription drug for pain worldwide. But recent studies show it doesn’t even work at all for the most common back, neck and joint pains. One study even showed that men and women who took Tylenol for back pain spent one more day in misery than those who took a sugar pill. Not surprising for a metabolic poison.

This drug is the first step on the World Health Organization’s (WHO) pain treatment protocol, for reasons they’ve never really explained. Plus, many international medical guidelines recommend Tylenol as the first-line drug therapy for a multitude of acute and chronic pain conditions.

If this useless poison is really the WHO’s first choice, then we must repeat the timeless question of the mid-20th century comedians Bud Abbott and Lou Costello, “WHO’s on first?”

Who’s on first, indeed? Certainly not all the poor patients worldwide suffering from pain.

This pharmacological farce is no laughing matter. It causes countless deaths and complications each year. But sadly, it appears the mainstream medical establishment is just beginning to recognize and report on this tragedy.

I repeat–never take acetaminophen (Tylenol) for any reason.