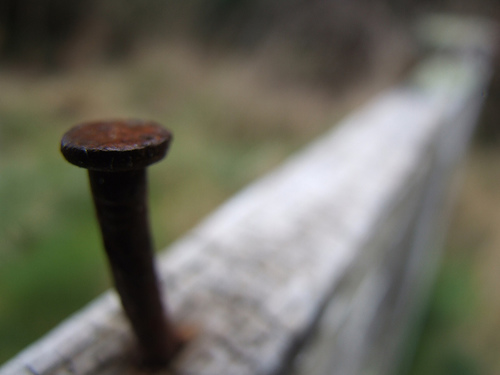 Fear is such a strong motivator for vaccines.

I know many families that don’t vaccinate, but they are still very fearful about tetanus and say that they might probably choose the tetanus vaccine if their child happened to step on a rusty nail.

Fear does that to people.

Most parents want to know why a child just can’t receive a tetanus vaccine? Why do they have to receive diphtheria and pertussis too? Why is tetanus given as a 3 in 1 shot? Does stepping on a rusty nail really warrant a tetanus vaccine?

And this is my hypothetical question that I have always wanted answered:  Why is it ok to give a child the tetanus vaccine (in the form of DTaP) at, say, their 1 year “well baby” visit, but only 2 weeks later, when they unexpectedly end up in the ER with an open would, the child is automatically given another tetanus booster (in the form of another DTaP)? How is this ok? And how does this make sense?

“Where are all the rusty nails?”

“You mean the rusty nails that actually have bacteria from cow manure on them? The ones that SOOooooo many children seem to be stepping on every year? Gee… we don’t know Tex. But if they are such a huge threat – then why don’t they offer the Tetanus vaccine WITHOUT the Diptheria and Pertussis for parents who might consider getting THAT vaccine if they don’t want the combo? Combo or singular- vaccines cause damage. Rusty nails are a FAR lesser threat than the aluminum and formaldehyde, and monkey DNA and aborted fetal tissue DNA and neurotoxins that make up these vaccines”

There is a story about a boy from New Zealand almost dying from tetanus that is circulating fb right now. Of course the gist of the story is that he was “unvaccinated”. Many vaccine safety advocate groups say the story is not true. If the story of the boy is true (which I doubt, because the story has a million holes in it), then based on what the parents are quoted saying, I have some major issues:

“As soon as they (the doctors) said it was tetanus my other two kids were vaccinated the very next day, against all childhood diseases.”

I couldn’t agree more with a comment I read on the Great Mother’s Questioning Vaccines fb page:

“If this article is in fact true then these parents are very reactionary and motivated purely by fear. They read a few scary stories and decided not to vaccinate then had a scary experience and vaccinated the heck out of all their kids. Not my kind of parenting role models regardless of their stance on vax”

You can read the original story (HERE) As you read it, it is very obvious this article was a push for vaccines and not really about the boy with tetanus.

I read an article on the Immunization Awareness Society for Informed Choice website today. It breaks the story down (properly) of this boy almost dying from tetanus and gives a very accurate portrayal of what informed consent really looks like in a family that originally choose to not vaccinate.

“… Everybody needs to understand above all else, is that informed consent is not made by listening to conspiracy theories, or emotions and feelings.  Informed decision making is also more than just saying ‘yes’ or ‘no’ to an intervention such as vaccination.

Most parents who make an informed choice not to vaccinate, will research thoroughly everything they can.  Not just about the diseases, or the vaccines, but what constitutes good health.  These parents do everything to ensure their children remain healthy and happy, and understand the risks involved in ALL the diseases, how to prevent them if possible, how to treat them at home, risk factors for the diseases and complications, and so on.

…parents who make a scientifically informed choice don’t make important health decisions on the basis of conspiracy theories online, or call themselves ‘hippies’, or assume that having a science degree makes them well informed; neither do they suddenly find out they are ignorant the night their child falls ill”
-Immunization Awareness Society for Informed Choice

You can read the full article (HERE)

Anyways, all of this can easily turn into a debate over whether or not the article about the unvaccinated boy is true or not. And really, who cares. This is about tetanus. Learning the truth about tetanus is what is most important.

So what is Tetanus?

In other words, to get sick with Tetanus, you must get the Clostridium tetani into your body, such as through the infamous example of stepping on a nail. Then you must ensure that the wound does not get oxygenated (does not bleed and is not exposed to air) and you must ensure the bacterium multiplies enough to start a life cycle, because the toxins released when they die is what causes Tetanus symptoms.

Summary: Tetanus requires a wound that is deep enough and neglected enough to create an anaerobic environment so that the bacteria can flourish, die off and spread a toxin in the body. The incubation period is 3-21 days, the average being 8 days.

And what does it mean to ‘oxygenate’? It means to bleed. Blood is oxygenated by passing through the lungs and then flowing through the body to oxygenate all the tissues. That is how we live. We are oxygenated creatures. So if you step on a nail and you bleed, the Clostridium tetani cannot live. In other words, Tetanus is impossible to get if you are alive, pumping blood normally through your body and taking care of the wound.  Feel bamboozled yet?” – Tetanus Vaccination: Fact & Fiction,  read entire article (HERE)

According to the CDC’s own website: “Tetanus is different from other vaccine-preventable diseases because it does not spread from person to person. The bacteria are usually found in soil, dust and manure and enter the body through breaks in the skin – usually cuts or puncture wounds caused by contaminated objects. Today, tetanus is uncommon in the United States, with an average of 29 reported cases per year from 1996 through 2009″

“Today, tetanus is uncommon in the United States, with an average of 29 reported cases per year from 1996 through 2009”?

Say what?!? Pretty much, the CDC’s own website tells us it’s not common and is found in wounds caused by contaminated objects…

“The incidence of tetanus had almost completely disappeared by the time vaccines became popular. Tetanus vaccines has been a part of  of mass inoculations since the 1940’s. It’s the T of DPT. Since the 1950’s a child received 4 DPT shots by the time he is 18 months old. Even after that, for life, any time anyone steps on a nail or gets a minor cut, tetanus “boosters” are routinely given. But what sense does it make to pretend to cure a disease that is caused by a puncture would which may have the remotest possibility of containing Clostridium by giving the person another puncture wound that definitely contains Clostridium, or its byproducts?

It’s one thing to claim that the vaccine could confer immunity before the injury happened. But to pretend a shot could immunize someone after the infection has occurred trespasses into the realm of superstition. No manufacturer has ever claimed curative powers for any vaccine. They’re preventatives, remember? That’s the whole basis of immunology.

Again, no scientists claim curative value after being infected with Clostridium. Nor do any suggest that a subsequent vaccine would prevent the development of tetanus. Think about it: if you have a disease process already going on, how could adding more of the pathogen or its toxoids to your blood possibly help you? This is pure science fiction” -Dr Tim O’Shea

1. “IF for some reason you and your child’s doctor assess a risk for Tetanus, you have the option of choosing a non-vaccine shot called Tetanus Immunoglobulin or TiG for short. The TiG is an anti-toxin serum, not a vaccine.

IMPORTANT: if you suspect Tetanus, make sure your child gets the TiG shot! Many doctors and nurses sadly are not informed on this issue. They will pressure you to give your child the vaccine instead. Even if you ask for the immunoglobulin, some medical employees might not know what this is or think you are mistaken and assume you want the vaccine. Sometimes they claim to have a “T” only vaccine, which is untrue.

2. Cuts, scrapes, nicks, and wounds need to be cleaned. Soap and water go along way.

3. Heat helps to kill tetanus bacteria. A good soak in some Epsom salts to help with wound healing is good.

One of my favorite doctors, Dr. Kurt Perkins says this:

Love Dr. Kurts humor! If you have not read his article called “My CRYSTAL Clear Stance on Vaccines”, you really should. You can find it (HERE)

How did the conventional wisdom of tetanus shots from a dirty rusty nail outdoors where Clostridium may be harbored in animals spoors – how did that idea get transformed to needing tetanus shots after the slightest most antiseptic nick around the house?” -Dr. Tim O’Shea from the book “Vaccination is NOT Immunization

The Truth about Tetanus…