Being a keen adopter of new gadgets, I was quick to embrace microwave cooking way back as the 80s. Admittedly, the food didn’t taste as good, but this seemed a small price to pay for speed and convenience. I even remember once taking a microwave away on holiday, because back then all you got in motels was “hot plates” and they seemed as primitive as finding some dry sticks and making a fire.

Years later, when becoming sick gave me some motivation to start looking at health issues, I came across the odd mention of the destructive effects of microwaves on food. At the time it seemed like too much information, and as I was finding out that pretty much everything I did or ate was harmful to my health, that was one of the things I chose to ignore.

Later, I started paying a lot more attention to health information, and stopped using microwaves in 1999. But I still thought it was really only protein that was badly affected by microwaves. Reading these articles was the final straw and was what ended microwave cooking for me. And it isn’t really all that difficult heating things on the stove.

It looks a little strange taking a hot plate away on holiday, but these days cooking food in a microwave seems as insane to me as fluoridation, genetic modification, or globalisation, and I’ve certainly never eaten anything cooked in a microwave this century.

The Hidden Hazards Of Microwave Cooking

by Anthony Wayne and Lawrence Newell

Over 90% of American homes have microwave ovens used for meal preparation. Because microwave ovens are so convenient and energy efficient, as compared to conventional ovens, very few homes or restaurants are without them. In general, people believe that whatever a microwave oven does to foods cooked in it doesn’t have any negative effect on either the food or them.

Of course, if microwave ovens were really harmful, our government would never allow them on the market, would they? Would they? Regardless of what has been “officially” released concerning microwave ovens, we have personally stopped using ours based on the research facts outlined in this article.

The purpose of this report is to show proof – evidence – that microwave cooking is not natural, nor healthy, and is far more dangerous to the human body than anyone could imagine.

However, the microwave oven manufacturers, Washington City politics, and plain old human nature are suppressing the facts and evidence. Because of this, people are continuing to microwave their food – in blissful ignorance – without knowing the effects and danger of doing so.

How do microwave ovens work?

Microwaves are a form of electromagnetic energy, like light waves or radio waves, and occupy a part of the electromagnetic spectrum of power, or energy. In our modern technological age, microwaves are used to relay long distance telephone signals, television programs, and computer information across the earth or to a satellite in space. But the microwave is most familiar to us as an energy source for cooking food.

Every microwave oven contains a magnetron, a tube in which electrons are affected by magnetic and electric fields in such a way as to produce micro wavelength radiation at about 2450 Mega Hertz (MHz) or 2.45 Giga Hertz (GHz). This microwave radiation interacts with the molecules in food.

All wave energy changes polarity from positive to negative with each cycle of the wave. In microwaves, these polarity changes happen millions of times every second. Food molecules – especially the molecules of water – have a positive and negative end in the same way a magnet has a north and a south polarity.

In commercial models, the oven has a power input of about 1000 watts of alternating current. As these microwaves generated from the magnetron bombard the food, they cause the polar molecules to rotate at the same frequency millions of times a second.

All this agitation creates molecular “friction”, which heats up the food. This unusual type of heating also causes substantial damage to the surrounding molecules, often tearing them apart or forcefully deforming them.

By comparison, microwaves from the sun are based on principles of pulsed direct current (DC) that don’t create frictional heat; microwave ovens use alternating current (AC) creating frictional heat.

A microwave oven produces a spiked wavelength of energy with all the power going into only one narrow frequency of the energy spectrum. Energy from the sun operates in a wide frequency spectrum.

Many terms are used in describing electromagnetic waves, such as wavelength, amplitude, cycle and frequency:

Amplitude determines the extent of movement measured from the starting point.

Cycle determines the unit of frequency, such as cycles per second, Hertz, Hz, or cycles/second.

We’ve all been told that microwaving food is not the same as irradiating it (radiation “treatment”). The two processes are supposed to use completely different waves of energy and at different intensities.

No FDA or officially released government studies have proven current microwaving usage to be harmful, but we all know that the validity of studies can be – and are sometimes deliberately – limiting. Many of these studies are later proven to be inaccurate. As consumers, we’re supposed to have a certain degree of common sense to use in judgment.

Take the example of eggs and how they were “proven” to be so harmful to our health in the late 1960’s. This brought about imitation egg products and big profits for the manufacturers, while egg farms went broke. Now, recent government sponsored studies are saying that eggs are not bad for us after all. So, whom should we believe and what criteria should we use to decide matters concerning our health?

Since it’s currently published that microwaves – purportedly – don’t leak into the environment, when properly used and with approved design, the decision lies with each consumer as to whether or not you choose to eat food heated by a microwave oven or even purchase one in the first place.

On a more humorous side, the “sixth sense” every mother has is impossible to argue with. Have you ever tried it? Children will never win against a mother’s intuition. It’s like trying to argue with the arm – appearing out of nowhere – that pinned you to the back of the seat when your mother slammed on the brakes.

Many of us come from a generation where mothers and grandmothers have distrusted the modern “inside out” cooking they claimed was “not suitable” for most foods. My mother refused to even try baking anything in a microwave. She also didn’t like the way a cup of coffee tasted when heated in a microwave oven. I have to fully agree and can’t argue either fact. Her own common sense and instincts told her that there was no way microwave cooking could be natural nor make foods “taste they way they’re supposed to”. Reluctantly, even my mother succumbed to re-heating leftovers in a microwave due to her work schedule before she retired.

Many others feel the same way, but they’re considered an “old fashioned” minority dating back to before the 1970’s when microwaves first overwhelmed the market. Like most young adults at the time, as microwave ovens became commonplace, I chose to ignore my mother’s intuitive wisdom and joined the majority who believed microwave cooking was far too convenient to ever believe anything could be wrong with it. Chalk one up for mom’s perception, because even though she didn’t know the scientific, technical, or health reasons why, she just knew that microwave ovens were not good based on how foods tasted when they were cooked in them. She didn’t like the way the texture of the microwaved food changed either.

A number of warnings have been made public, but have been barely noticed. For example, Young Families, the Minnesota Extension Service of the University of Minnesota, published the following in 1989: “Although microwaves heat food quickly, they are not recommended for heating a baby’s bottle. The bottle may seem cool to the touch, but the liquid inside may become extremely hot and could burn the baby’s mouth and throat.

Also, the buildup of steam in a closed container, such as a baby bottle, could cause it to explode. Heating the bottle in a microwave can cause slight changes in the milk. In infant formulas, there may be a loss of some vitamins.

In expressed breast milk, some protective properties may be destroyed. Warming a bottle by holding it under tap water, or by setting it in a bowl of warm water, then testing it on your wrist before feeding may take a few minutes longer, but it is much safer.”

In 1991, there was a lawsuit in Oklahoma concerning the hospital use of a microwave oven to warm blood needed in a transfusion. The case involved a hip surgery patient, Norma Levitt, who died from a simple blood transfusion. It seems the nurse had warmed the blood in a microwave oven. This tragedy makes it very apparent that there’s much more to “heating” with microwaves than we’ve been led to believe. Blood for transfusions is routinely warmed, but not in microwave ovens. In the case of Mrs. Levitt, the microwaving altered the blood and it killed her.

It’s very obvious that this form of microwave radiation “heating” does something to the substances it heats. It’s also becoming quite apparent that people who process food in a microwave oven are also ingesting these “unknowns”. Because the body is electrochemical in nature, any force that disrupts or changes human electrochemical events will affect the physiology of the body. This is further described in Robert O. Becker’s book, The Body Electric, and in Ellen Sugarman’s book, Warning, the Electricity Around You May Be Hazardous to Your Health.

In Comparative Study of Food Prepared Conventionally and in the Microwave Oven, published by Raum & Zelt in 1992, at 3(2): 43, it states “A basic hypothesis of natural medicine states that the introduction into the human body of molecules and energies, to which it is not accustomed, is much more likely to cause harm than good.

Microwaved food contains both molecules and energies not present in food cooked in the way humans have been cooking food since the discovery of fire. Microwave energy from the sun and other stars is direct current based. Artificially produced microwaves, including those in ovens, are produced from alternating current and force a billion or more polarity reversals per second in every food molecule they hit.

Production of unnatural molecules is inevitable. Naturally occurring amino acids have been observed to undergo isomeric changes (changes in shape morphing) as well as transformation into toxic forms, under the impact of microwaves produced in ovens.

One short-term study found significant and disturbing changes in the blood of individuals consuming microwaved milk and vegetables. Eight volunteers ate various combinations of the same foods cooked different ways. All foods that were processed through the microwave ovens caused changes in the blood of the volunteers. Hemoglobin levels decreased and over all white cell levels and cholesterol levels increased. Lymphocytes decreased.

Luminescent (light-emitting) bacteria were employed to detect energetic changes in the blood. Significant increases were found in the luminescence of these bacteria when exposed to blood serum obtained after the consumption of microwaved food.” 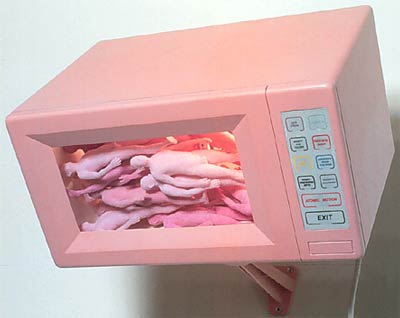 From the conclusions of the Swiss, Russian and German scientific clinical studies, we can no longer ignore the microwave oven sitting in our kitchens. Based on this research, we will conclude this article with the following:

3). Male and female hormone production is shut down and/or altered by continually eating microwaved foods.

4). The effects of microwaved food by-products are residual [long term, permanent] within the human body.

5). Minerals, vitamins, and nutrients of all microwaved food is reduced or altered so that the human body gets little or no benefit, or the human body absorbs altered compounds that cannot be broken down.

6). The minerals in vegetables are altered into cancerous free radicals when cooked in microwave ovens.

7). Microwaved foods cause stomach and intestinal cancerous growths [tumors]. This may explain the rapidly increased rate of colon cancer in America.