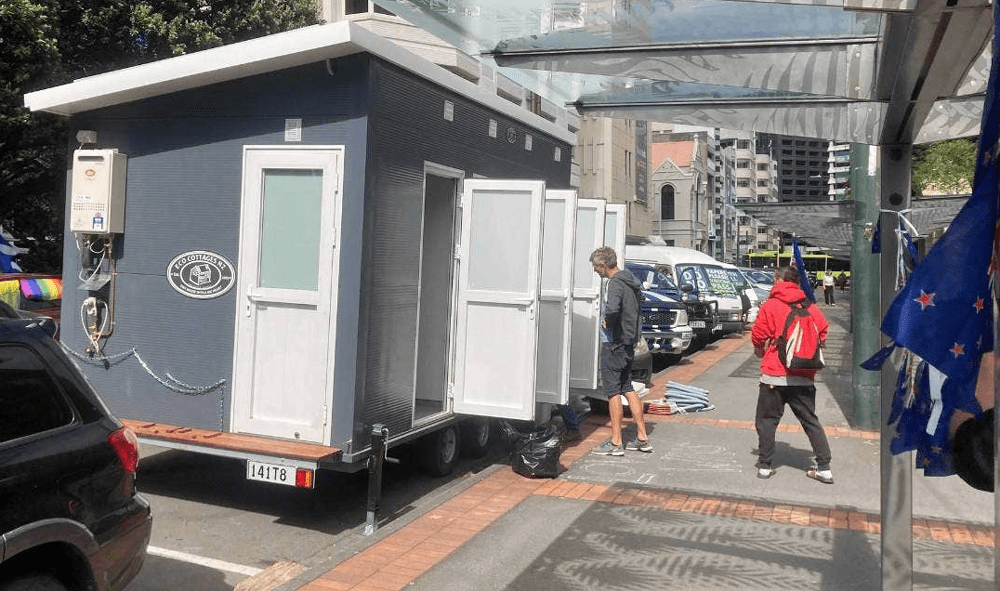 On Day 20, some tradies built some toilets, plumbed directly into the sewers, because the police were blocking the portaloo maintenance men.

On Day 23, the police broke the law in so many ways, I barely know where to start.

Word on the street was that the police were going to raid around 4am, so we didn’t get much sleep. I imagine those holding the line got way less. I started the day crying as I watched scenes of the police pepper spraying and beating peaceful citizens, destroying private property and generally behaving like thugs. The day did not improve.

I collected up some milk and cotton pads (for cleaning pepper spray out of eyes) and some easy to eat energy food, and headed for Food HQ. On the way we found ourselves behind Jabcinda’s taxi. It was sad to see it leaving, but not as sad as it would have been to see it damaged. I collected more food from Food HQ and headed to the grounds with another freedom lover. After leaving our supplies in the right places we looked around for what to do, and helped pack up a couple of the service areas, so they could leave quickly if they needed to. One of those was the healer area. But in a later live, I saw Antifa agitators setting fire to a massage table, so not sure how much got saved.

Although there was still a line of police facing protestors, things seemed fairly stable, so I took a few photos and headed home. Checking in with lives when I got home, it wasn’t long before I was crying again. Words cannot describe how horrific today was, but here’s some of what I saw.

Hundreds of police arrived on scene at dawn, with batons, riot gear and many with their ID numbers covered. Their aim seemed to be to totally clear Parliament grounds, though I don’t know that the wanton destruction they created was entirely planned. They started in Hill St and Molesworth St. Those were the scenes that greeted me this morning, including a video of four or five of them beating and kicking one woman. One man was filming and was beaten with a riot shield till his hip broke. He was then left lying in the street for some hours. Other footage I saw tonight showed an elderly man being punched violently and collapsing onto the street.

Although it was quiet as I walked up Molesworth St, things were so different from last time I was there.

The food tents a few days ago. The site of the beautifully and lovingly built Peehive toilets a few days ago. A few days ago, I was told by a reliable source, who had spoken to the Bishop, that he gave permission for protestors to camp in the Cathedral grounds, and has been offering solace to anyone who came to see him. The police were there, smashing tents and other private property, that were legally on the premises, and throwing them into the street, to later be taken away by forklift.

The Cathedral grounds a few days ago The Cathedral grounds today, and this is only a fraction of the police. Later this afternoon, the police moved through Parliament grounds.

They pepper sprayed, and possibly tear gassed, people. On Chantelle Baker’s live, she was up high filming. not doing anything else. A cop started spraying her and kept on going, even though it was all being filmed. There were similar images everywhere. So many images of people needing milk to clear out their eyes.

They again smashed everything in their path. Wanton destruction, giving nobody chance to clear any of their things.

Two stories coming out of these actions involve the possible deaths of two young people. One is that a four year old was in a tent that was destroyed, and was killed. It seems a bit unlikely that a child was left alone in a tent, so I pray this one is not true.

The other one does seem possible, given that we have seen evidence that they don’t stop pepper spraying, and will spray with little provocation. This story involves a 16 year old girl climbing a tree to escape police and being sprayed till she fell onto concrete. I pray this is not true too.

Even if neither of these is true, it does seem that police pepper sprayed five other children.

It was claimed that police knocked over a generator and set a tent on fire. This spread to a sizeable part of Parliament grounds, including some trees and a children’s slide that cost the tax payer $600,000 (how on earth did a children’s slide cost that much?).

In one scene they appeared to be using water cannons.

Around 6pm, they seemed to be pushing people from Bunny St into Thorndon Quay, right as commuters are trying to get home. It’s also being said they were using rubber bullets. Protest security were directing traffic to try and let commuters through while protecting the people. How much more surreal can this day get?

To be fair, not all of the violence came from the police. It’s hard to be sure how much of the response was people being pushed past their limits. But there is a lot of evidence suggesting that much of the supposed protestor violence was staged by Antifa NZ. Chantelle took quite a bit of footage of people coming in masked up, setting fires or throwing blocks of wood into the crowd, and then running off. Needless to say, these are not your regular protestors. Dare I suggest they were sent in to make us look bad?

There was also another eye witness account saying that the first fire was set delberately by masked people, so were all fires lit by them? On MSM news tonight, we heard Ardern say “We will not be defined by this”. The worldview of this woman is beyond unbelievable. Sorry, Jacinda, your administration and your reputation has been defined not just by today, but by the last two years. You, your government, the police and the media will never regain respect after today’s actions.

Despite the horror and sadness of the day, there were still moments of light. I had the pleasure of meeting the man so violently eye gouged by police last week. You can see he is still healing, but he was remarkably philosophical about it. You know what he said to H and I? That he was glad that he was there to take it, if it meant other people were spared. That’s love in action. As I went across the front of the barricades, despite everything that had already happened, there was a young girl, maybe 12 or 13, who was choosing bubbles over anger. See two of them in the photo below? There are many people who come from out of Wellington, whose accommodation has just been destroyed, and others have been evicted from Ngati Toa domain by police. Where are they expected to stay tonight? Oh yes that’s right, Ardern doesn’t care. She has created her two tiers of society, set the police on the ones who can see through her, and probably actively wants them on the street in the cold tonight. But this community isn’t over because of one very bad day. Alternate accommodation is being arranged for everybody.

I don’t know what’s happening downtown now. I can’t find any current live streams. But I hope and pray that everybody is being looked after tonight. Sleep well, and get some rest, warriors of light. Tomorrow is another day. This is not over, it will just look different tomorrow.

Leaving you with an image from an earlier day.