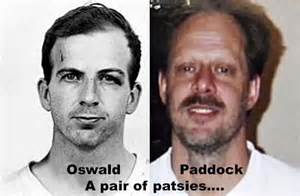 It’s all bollocks. The “official” narrative of how things went down in the Las Vegas massacre is so full of holes that it begs the question of just how deep the truth about this attack really goes.

What we know for sure is that, yes, 59 people were killed and hundreds were wounded. This wasn’t another “hoax” shooting — people actually were shot, wounded and killed. Yet the official narrative that claims Stephen Paddock — a retired, 64-year-old accountant with absolutely no firearms training, no gun experience and no physical stamina — was somehow able to expertly wield a highly complex and physically demanding weapon system for 10 sustained minutes is total nonsense.

Even highly trained Navy Seals would have a difficult time running a full auto weapon for 10 minutes straight. Such weapon systems are brutal on the operator. They require tremendous strength, stamina and expert troubleshooting to keep running. Full-auto weapons overheat and jam. They demand incredible strength to keep aimed on target. They require expert reloading and weapons clearing in the case of jams, and the hotel room would have been so full of smoke and powder residue that it would be almost impossible to keep breathing from that enclosed space.

Far from what the firearms-illiterate media claims, these are not systems that any Joe off the street can just pick up and use to effortlessly mow down 500 people. Running these systems requires extensive training, experience and stamina. It is physically impossible for a guy like Stephen Paddock to operate such a system in the sustained, effective manner that we witnessed, especially when shooting from an elevated position which throws off all the ranging of the weapon system.

Far from being a Navy Seal, Stephen Paddock was a retired accountant senior citizen with a gambling problem and a flabby physique. The only way he could have carried out this shooting is if he were transformed into a human superweapon through a magic wand. I’m calling this “Mission IMPOSSIBLE” because of the physical impossibility of a retired, untrained senior citizen pulling this off.

Here are 10+ reasons why the official narrative is complete BOLLOCKS:

#1: As many as 10 rifles were found in his hotel room… but only one shooter?

The NY Daily News is now reporting that Stephen Paddock “brought at least 10 weapons into a Las Vegas hotel room.”

Why would a single shooter need 10 rifles? Managing just one full auto weapon system is so difficult that it’s probably beyond the physical capabilities of a 64-year-old retired accountant, which is what Paddock was.

The fact that 10 rifles were found in his hotel room says three very important things:

#2: As with many orchestrated shootings, the scapegoat was murdered before he could talk

According to numerous media reports, Paddock was found dead in his hotel room, shot to death. The official narrative claims that he shot himself before the police breached the room, but that is an assumption, not an established fact. There is no evidence whatsoever that Paddock shot himself. It is simply assumed that he did so. I would ask to see the ballistics evidence of the shot that killed him.

Isn’t it all convenient? There’s no one left to question, and they don’t even have to drug the guy into oblivion like they did the Aurora, Colorado shooter named James Holmes. Eliminating the scapegoat is the oldest trick in the book, as we were all reminded with the shooting of JFK.

#3: Why are there no muzzle flashes visible from the 32nd-floor Mandalay Bay windows in any of the videos that captured the shooting?

If you look at the shooting videos that have been posted online, none of them show any muzzle flashes from the room on the 32nd floor that we’ve been told is the source of the shooting. How can that be? The following video captures the sound of the automatic weapons fire — and even appears to capture at least TWO weapons firing simultaneously — yet shows no muzzle flashes from the 32nd floor windows of the Mandalay Bay hotel.

In fact, the video below shows what might be muzzle flashes from a completely different location closer to the 5th floor. This same video also appears to show someone resembling Stephen Paddock attending an anti-Trump rally, wearing a so-called “pu##y hat” that was very popular among anti-Trumpsters. One working theory is that Paddock is an anti-Trump Leftist who specifically chose a Country Western event in order to murder as many conservatives as possible:

#4 Why does the gunfire in multiple online videos clearly sound like automatic weapons fire from MULTIPLE weapons?

I challenge anyone to listen to the gunfire in these online videos and conclude it’s only from a single weapon. The very idea is totally absurd. You can clearly hear at least two automatic weapons systems firing over each other.

Listen to the automatic weapons fire at about the 2:00 mark in the video below. It’s clearly coming from multiple weapons:

#5: ISIS has openly claimed responsibility for the attack, stating that Paddock “converted to Islam” months earlier

As reported on Shootings.news, ISIS has already claimed responsibility for the Las Vegas shooting:

Islamic State has claimed responsibility for a shooting that killed at least 50 people and wounded over 400 in Las Vegas early on Monday, and said the attacker had converted to Islam a few months ago.

ISIS has a long track record of only claiming responsibility for events they inspired or planned. It would not be in the interests of ISIS to falsely claim credit for an attack they did not help carry out, as that would discredit their own supporters and funding sources.

#6: Stephen Paddock had no familiarity with automatic weapons and no military training; was not a “gun guy”

Saying his family was in shock, Paddock’s brother told US media he could not understand what motivated his elder brother.

“Where the hell did he get automatic weapons? He has no military background or anything like that,” Eric Paddock told CBS News.

“He’s a guy who lived in a house in Mesquite, drove down and gambled in Las Vegas. He did stuff. Eat burritos.”

And from NY Daily News:

Eric said his brother was typically no fan of such weaponry. “Not an avid gun guy at all,” Eric Paddock told CBS News outside his home in Waterford Lakes, Fla.

#7: How does a 64-year-old accountant with no military training possess the strength and stamina to fire a fully automatic weapon for nearly 10 minutes?

People who aren’t familiar with firearms have no idea how difficult it is to conduct sustained fire with an automatic weapon. It requires tremendous strength, endurance and training — something that Stephen Paddock had none of. Military special forces operatives train for years to be able to manage such weapons and handle all the problems they pose (barrel overheating, ammo jams, double feeds, recoil management, etc.). The idea that some senior citizen accountant can just pick up a machine gun and lay down thousands of rounds of effective fire in a sustained, 10-minute assault even though he had no experience with such weapons is completely ludicrous.

It actually looks like someone else staged all the guns in the room, perhaps with Paddock’s willingness, then shot and killed Paddock to make him the scapegoat.

Numerous media reports confirm that Paddock had no familiarity with guns and certainly didn’t have any experience with automatic weapons. Via the UK Daily Mail:

Despite being found amid an arsenal of weapons, Eric said that his brother had never been ‘an avid gun guy at all’, adding that he was at a loss as to where Stephen got his arsenal of automatic weapons from.

#8: Stephen Paddock was gambling away huge amounts of cash… where did he get all that money?

According to NBC News, Paddock was engaged in high-stakes gambling to the tune of as much as $30,000 per day:

On several occasions, Stephen Paddock gambled more than $10,000 per day — and in some cases more than than $20,000 and $30,000 a day — at Las Vegas casinos, according to an NBC News source who read the suspect’s Multiple Currency Transaction Reports (CTR) and a casino gaming executive.

Was he paid to be part of an operation that would then be blamed on him by making him the scapegoat? Some media reports state that Paddock was a wealthy real estate investor. If that’s true, why would he blow all that wealth on gambling?

#9: Stephen Paddock has no criminal history, no record and no apparent beef with anybody

Further supporting the notion that Stephen Paddock was a scapegoat for all this,

…Paddock had no federal, state or local history with law enforcement before his Sunday night rampage that left 58 dead and more than 500 injured. “We had no knowledge of this individual,” said Clark County Sheriff Joe Lombardo. “We checked all the databases…”

From the UK Daily Mail, we learn that Paddock had no affiliation with any particular activist group, political group or religious group as far as anyone knows:

What’s clear from this attack is that it was planned, funded and coordinated. This was not some spontaneous “lone wolf” scenario; it involved multiple weapons being fired simultaneously, long-term planning, staging and financial logistics.

The official narrative that claims this retired accountant just “snapped” and somehow picked up an automatic rifle and expertly laid down highly effective fields of automatic weapons fire for 10 minutes without pause is so insanely stupid as to be laughable.

Only a highly-trained weapons expert with tremendous physical strength, stamina and training could have pulled this off. And that’s clearly not Stephen Paddock.

#11: How was the FBI able to almost immediately declare Paddock had no ties to ISIS — barely 12 hours after the shooting — when the same agency has spent over a year investigating President Trump with zero evidence linking him to Russia, all while refusing to declare Trump has no ties to Russia?

Finally, don’t you find it amazing how the FBI was able to clear any ISIS connection in less than 12 hours after the shooting? This is the same FBI, remember, that has spent over a year desperately trying to find a Russia conspiracy link to President Trump, yet has been unable to do with any legitimate evidence whatsoever. Yet more than year into their investigation, they refuse to clear President Trump of Russia collusion.

Isn’t that interesting? Somehow, the FBI is so amazingly effective and efficient that they can conclude a massive investigation of Stephen Paddock in a mere 12 hours, yet they never quite seem to complete their investigation of President Trump.

Keep asking questions, everyone. And stay informed on all this at Shootings.news.

I’ve haven’t included the YouTube videos because the are all being censored by YouTube – but some may still remain and might still be linked to from the original article here: