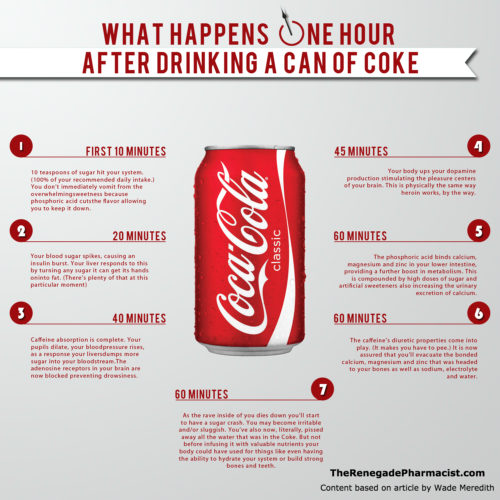 In the first 10 minutes of drinking a Coke, 10 teaspoons of sugar enter the body. That’s 100 percent of a person’s recommended daily intake. A person can only tolerate the extreme sweetness because the teeth-rotting phosphoric acid offsets the sweetness.

After 20 minutes has gone by, the blood sugar spikes, causing a burst of insulin. As the fructose runs rampant and goes unabsorbed, the liver goes into overtime, drawing in the sugar molecules and turning them into bad fats.

By the time 40 minutes hits, caffeine absorption maxes out. A person’s blood pressure spikes and their pupils dilate. This spurs the liver to dump more sugar into the bloodstream. Consequentially, the brain’s adenosine receptors are blocked, making the person feel awake.

Five minutes later, dopamine production goes up in the brain, giving the person feelings of pleasure that addict them into wanting more.

After an hour, the phosphoric acid that has made its way through the system has pulled out vital nutrients from the body. Calcium, magnesium and zinc bind with phosphoric acid in the lower intestine.

Calcium, magnesium, zinc, electrolytes and water are then urinated out the body and wasted. The Coke has not only addicted the brain to its curse but it has also caused the formation of bad fats, blood sugar spikes, blood pressure changes, dehydration and the loss of bone building nutrients!

As the hour climaxes, a person begins to have a sugar crash. Irritability and fatigue sets in. The bones are robbed of vital nutrients and the system is left dehydrated.