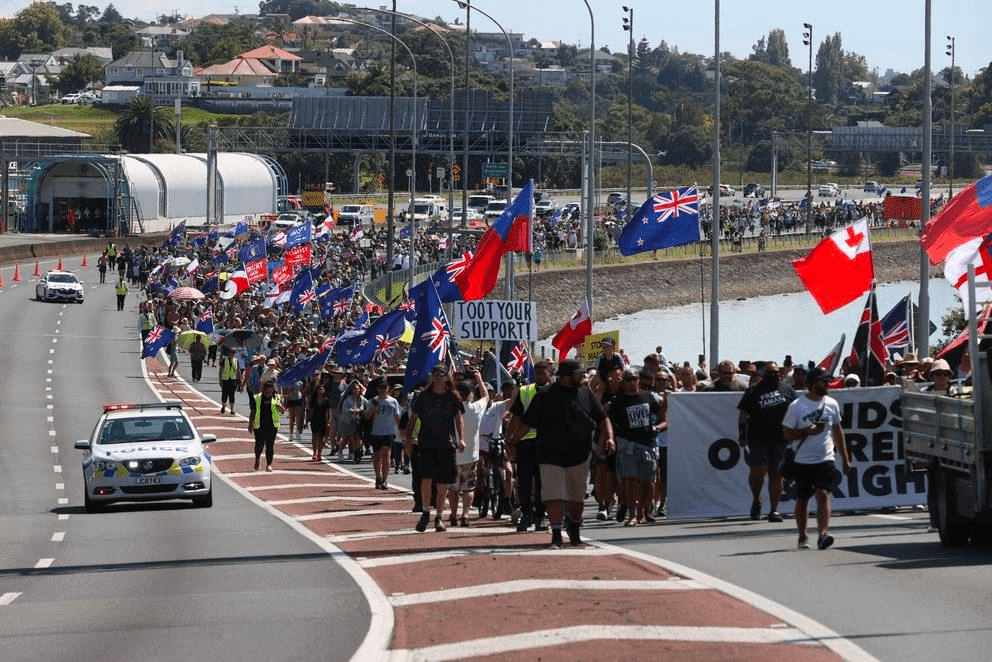 Saturday was a beautiful day in our lovely capital city of Wellington, and it was hot but mellow down in Freedom Village. It turned to a bit of drizzle in the evening and Sunday had a distinctly autumn feel, even though it’s still technically summer. Let’s set our intention for a mild autumn.

The Freedom and Rights Coalition (TFRC) facilitated six marches with the theme “Mandates Gone 1st March”. The Auckland and Northland march went over the Harbour Bridge and estimates of the number of people were 10’s of thousands. More happened in Tauranga, Napier, Wellington, Nelson and Christchurch. [Photos are all from TFRC Facebook page.] A couple from Nelson had been unable to arrange their wedding, as it had been canceled twice, and they weren’t then allowed in a registry office. So change of plan. They obtained a pulpit from a local Nelson church, brought it up to Wellington and got married in Parliament grounds on Saturday morning, in front of hundreds of new friends. One of many wonderful firsts in this thriving community. Over the weekend, two more convoys made their way to Wellington, from the top of the North and the bottom of the South. Again, people turned out in droves all over the country to support them as they went through. I haven’t heard if the North Island convoy has arrived in Wellington yet. But the South Island convoy arrived in Picton late today, much to the displeasure of the locals. They have already had Nelson Square full of protestors for two weeks. How many freedom camps can we set up throughout the country? There is a camp in Christchurch, and I hear one is being set up on the domain in Auckland too. Weather permitting, there is word that there will be a flotilla leaving Picton for Wellington tomorrow.

A few days ago, one of our MPs called protestors a “River of Filth”. But this weekend, a group of skilled carpenters, builders, plumbers and drainlayers are in the process of constructing some toilet blocks that are plumbed directly into the city’s sewer system. This will reduce some of the reliance on the portaloos, and help prevent the river of filth that government and MSM are desperate for the public to believe we are creating. For the kids, someone brought in a trampoline, complete with safety net. Part of the architecture outside the Court of Appeal was turned into a paddling pool. By the time I got there on Sunday, it wasn’t warm enough to have occupants. But have a look at this. Prime CBD real estate, normally just a decorative display, but now turned into something useful and therapeutic. The new food tent is up and running, getting prepped for the evening service. You can see at the right hand side there is another level behind for storage and food prep. And how cool is this, that a coffee bar came all the way from Whangarei to supply free coffees to the people? I went down for a 5pm performance by Jeff Clarkson, who for 40 years has been producing beautiful meditation music, and I never knew he was a kiwi! Unfortunately he had some technical issues and couldn’t finish his performance. Hopefully he will try again tomorrow.

But I met a couple of friends and we chatted to a very interesting man, who explained Ardern’s archetype in Jungian psychology as being the devouring mother who can’t let her children be independent. He also had some fascinating ideas on ways to shock the unaware into seeing what’s happening.

Before we moved on, I had to take a photo of this couple whose clothing choices I loved! See the crosses strung up in the background? There are over 300 now lined up above the barricades. These represent the 300+ deaths from the jab that NZDSOS and Health Forum NZ have corroborated. We then went down to the healers tent to see if there was anything we could do there, and I spent an hour there before heading home.

Although the recordings I took of Jeff Clarkson weren’t good enough, due to the technical issues, there’s no reason you can’t enjoy some of his music anyway.